40% of cannabis products purchased from 20 illicit stores in New York City were found to contain harmful contaminants such as E. coli, lead and salmonella, according to a report commissioned by the New York Medical Cannabis Industry Association.

About 40% of cannabis products purchased from 20 illicit stores in New York City were found to contain harmful contaminants such as E. coli, lead and salmonella, according to a report commissioned by the New York Medical Cannabis Industry Association.

One of the products purchased also included double the amount of advertised THC, the psychoactive ingredient in marijuana.

All of the items tested also failed the state’s proposed branding regulations, with many including images of copyrighted food brands — such as Rice Krispies treats — that could be mistakenly confused with the real product, posing a particular threat to children, according to the study released Wednesday.

While New York state is on the cusp of welcoming legal cannabis dispensaries statewide after doling out more than 30 licenses on Nov. 21, many businesses have jumped the gun by opening illegal shops that conspicuously sell marijuana. To date, products sold at illicit shops have largely flown under the radar as law enforcement struggles to close locations.

Earlier this year, the Office of Cannabis Management, the state agency that’s overseeing the market rollout, sent out dozens of cease-and-desist letters to illicit operations statewide, although it’s unclear whether those stores have since closed.

“Allowing these unregulated, illicit operations to continue operating with impunity will only exacerbate an already alarming public health trend, especially among teens and young adults who either are unaware of or choose to ignore the health risks,” according to the report.

The study was conducted in August, with online resources like Facebook and Google Maps guiding the initial search for stores. Of the 30 dispensaries indentified, 20 were visited, with two THC products purchased at each site and then subsequently tested at an independent lab. Both E. coli and salmonella can cause serious health problems. The former can cause complications such as lung infections, whereas the latter can lead to severe fever and fatigue, the study says. 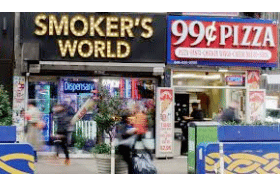