On June 22, 2021, Los Angeles City Council adopted an ordinance replete with substantive amendments to the City’s Cannabis Procedures Ordinance. Assuming that the Mayor signs this into law, there are several new rules for LA you should know about.

The Ordinance Amendments are quite comprehensive and aim to refine sections of the ordinance, provide clarity regarding modification processes, especially concerning relocation, and the applicability of certain modification fees for existing and future modification requests.

Since the amendments do not actually allow for or create additional cultivation licenses, implicit in this is the opportunity for SEIA to apply via the Public Convenience and Necessity (“PCN”) process instead. The rules for PCN essentially require convincing City Council that the approval of the License application would serve the public convenience or necessity. Currently, the City only accepts PCN applications for Retail applicants under the Social Equity Program and it remains to be seen if and when the City will create rules for this process for cultivation applicants. With this newest amendment to the ordinance, until 2025, all LA commercial cannabis activities (other than manufacturing and distribution) require SEIA moving forward.

Up to this point, the DCR has been adamant about emphasizing that a licensee does not vest at its property until receiving Temporary Approval. This presents issues because it means that a sensitive use may be established while an applicant is in the process of building out its facility and the proposed premises may be rejected upon final review. To address this issue, the City amended the ordinance to create a Verification Date for sensitive uses – the date of payment of the Pre-Application Review Fee or Modification Request Form Review Fee. Hopefully this gives operators more peace of mind when entering into lease/purchase agreements for their proposed premises and investing the time and money into preparing the space for operation.

P3RR1 is notorious for its controversy and drawn out issuance of licenses. Because of the pause on licensing and uncertainty that happened immediately following the application window, many applicants lost site control of their proposed premises for one reason or another. Accordingly, the City approved an amendment that would allow Applicants deemed eligible for further processing in P3RR1 to relocate without paying the Business Premises Relocation Fee ($3,554) provided that the relocation request is made before December 31, 2021.

Historically, those grandfathered as Existing Medical Marijuana Dispensaries (EMMDs) in the City were required to be vertically integrated and thus were made to operate manufacturing, cultivation and distribution activities in the same building as their retail. Thereafter, the City banned operations of non-retail commercial cannabis activities in commercially zoned properties, but grandfathered EMMDs in their original locations. In a big win for EMMDs, the grandfather clause on zoning has been extended from expiring on 12/31/2022 to 12/31/2025 and EMMDs will not need to relocate until then (unless it is extended again). In its recommendation, DCR cited COVID-related delays, modification processing times, and other challenges – like finding compliant property.

5. Number of Licenses Available in Phase 3, Round 2 – Lottery

While we still do not have an answer as to when the Phase 3, Round 2 application lottery will take place, the proposed ordinance would allow for as many Applicants to be deemed eligible for further processing as there are total available licenses in Community Plan Areas that have not reached Undue Concentration.

6. Relocations After the Issuance of Temporary Approval

Previously, the ordinance allowed licensees to expand their business premises/operations by 500 sq. ft. or 20% of the existing floor area, whichever was less. The amendments increased these limits to 2,500 sq. ft. or 50%, whichever is less. If you have questions regarding the process of expanding and requesting this sort of modification with the DCR, please contact our office.

8. New Process for Findings of Public Convenience or Necessity (PCN)

The amendments require PCN Applicants to submit a Pre-Application and pay a Pre-Application Review fee prior to seeking a PCN finding from the City Council. DCR believes this will promote efficiency by ensuring that City Council considers only the applications for businesses whose proposed premises are compliant. Upon a finding of public convenience or necessity, the Applicant will be required to pay a Temporary Approval Application Fee within 30 days of the Council’s action becoming final.

Lastly, the proposed amendments give DCR some additional enforcement abilities including: 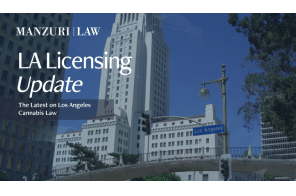