April 29, the Food and Drug Administration announced plans to ban menthol-flavored cigarettes and all flavored cigars, starting in 2022.

The FDA’s proposal responds to a lawsuit from the African American Tobacco Control Leadership Council calling for the national ban, which would target makers and sellers, not users, of menthols and flavored cigars.

Tobacco companies will likely challenge the decision in court, according to Stat News.

But such a ban would affect many cannabis consumers—primarily Black smokers—who roll marijuana into flavored tobacco or cigar leaves, commonly called a blunt. Half of cigar sales in 2020 were two flavored brands: Black and Mild, followed by Swisher Sweets.

The FDA wants to reduce tobacco use, the leading cause of preventable death in the US. The agency stated that banning menthols and flavored cigars would reduce the number of kids who start smoking, and encourage menthol smokers to quit.

The FDA also said it specifically wants to reduce the number of Black Americans dying from tobacco. Three-quarters of Black smokers smoke menthols.

“Banning menthol—the last allowable flavor—in cigarettes and banning all flavors in cigars will help save lives, particularly among those disproportionately affected by these deadly products,” acting FDA Commissioner Janet Woodcock said in a statement.

A menthol and flavored cigar ban would avert 237,000 African American deaths from tobacco use.

Banning menthols may cause 923,000 US smokers to quit, including 230,000 Black Americans in the first 13 to 17 months after a ban goes into effect. An earlier study claims the ban would prevent 633,000 deaths, including about 237,000 deaths averted for African Americans.

To do that, massive tobacco companies and distributors would face punishment for making, distributing, and selling menthols and flavored tobacco no earlier than next year.

A menthol and flavored tobacco ban faces criticism not only from Republican and libertarian, small-government types, but also from the ACLU and other left-leaning groups worried about over-policing Black people.

“A menthol cigarette ban would disproportionately affect communities of color, resulting in criminalization and more incarceration. We can avoid this approach,” the ACLU tweeted.

Criminalization of menthol cigarettes “really scares me,” Maritza Perez, director of national affairs at the Drug Policy Alliance, told reporter Marc Gunther. “It will give law enforcement another excuse to harass, surveil, and police people of color,” she said. “This will have tremendous racial disparities.”

In online comments, cannabis consumers, as well as members of the Black community, were divided.

Others community members resent the loss of personal freedom to choose a flavored wrap over a paper.

Blunt freedom isn’t worth the cost, said Mitch Zeller, director of the FDA’s Center for Tobacco Products, in a statement.

“For far too long, certain populations, including African Americans, have been targeted and disproportionately impacted by tobacco use. Despite the tremendous progress we’ve made in getting people to stop smoking over the past 55 years, that progress hasn’t been experienced by everyone equally.” 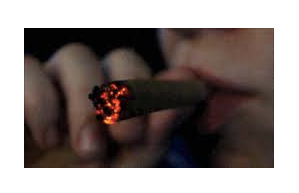