Essentially, they are saying, it’s time to register & organize and especially in Scomo’s seat where  Don Fuggle is the man… I wonder if his vote tagline will be

Preparing for the next federal election

A federal election will be called within the next 10 months.

HEMP, or perhaps Legalise Cannabis if the name is changed at the next formal meeting, will require candidates and funds for the Australian Electoral Commission (AEC) nomination fees, plus campaign expenses.

Two senate candidates are the minimum for each state or territory with $4,000 in fees. There may be some lower house candidates at $2,000 each, including Don Fuggle in ScoMo’s electorate of Cook, our first provisional candidate for the election.

There were 14 HEMP senate candidates in the 2019 election. The Northern Territory attracted 3.8% of the primary vote, narrowly missing out on the 4% threshold for electoral funding. NSW & SA both attracted 2.1% of the primary senate vote. 2019 Senate Results

In 2016, HEMP had over 4% of the primary senate vote in the NT and was united with the Sex Party on the ballot. We split the electoral funding return, about $7k each. HEMP also had a $10k donation from an Embassy supporter that was received too late to spend on the 2016 campaign.

So, HEMP had a head start on funding the 2019 campaign where $28,000 was spent on AEC nomination fees and not much more on the campaign. The Nimbin HEMP Embassy covered most of the shortfall.

For the 2022 federal election, next May or sooner, there could be a full clutch of senate candidates, and a Fuggle or two, ready to roll. The main hurdle is finding the funding, especially during difficult circumstances. Anything you can contribute is very much appreciated.

Click on the image and throw your hat in the ring

Legalise Cannabis Parties in South Australia, Victoria and NSW are in progress for registration and their applications will be accepted or pending at the next HEMP AGM in November.

Changing the Party name does require amending HEMP’s Constitution. The Legalise Cannabis Qld’s proposal to change the name will most likely be accepted by a majority at the next formal meeting.
hemp.org.au/about/constitution

If you can, please help us build membership to register Legalise Cannabis parties for every state election. Exciting as it is getting two candidates elected in Western Australia, it’s much more difficult to register a political party in the NSW.

We need some help in Victoria and South Australia too. You, your family or your friends can help by joining online. There are no membership fees.
legalisecannabis.org.au/join 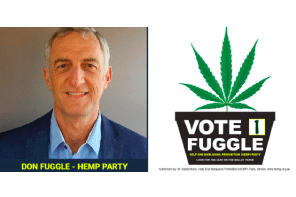