Cannabis farmers who have set up hundreds of greenhouses near the town of Weed say local authorities and fire agencies let the Lava Fire burn through their properties in the Mount Shasta Vista subdivision on Monday without bothering to try to put it out, blocking them from bringing their own water trucks so they could fight the fire themselves.

Local authorities disputed those charges and said the marijuana farmers blocked roads, threw rocks and forced Cal Fire crews to retreat from the scene. The tensions between the farmers, who are mostly of Hmong and Chinese descent, was the latest flare-up between law enforcement and growers in the remote area that reached a deadly point this week when officers shot and killed a Hmong man who they say tried to drive through a checkpoint brandishing a gun.

After the fire swept through most of their neighborhood, the farmers were using their water trucks to douse their smoldering properties on Tuesday. Authorities estimate there are 5,000 to 6,000 greenhouses growing pot in the Big Springs area, with as many as 4,000 to 8,000 people tending them.

In interviews with The Sacramento Bee, cannabis growers said the lack of firefighting response is the latest act of racism against them by Siskiyou County officials, who have for more than a year cracked down on the illegal cannabis farms that have been expanding dramatically on the private lands in the Big Springs area in far Northern California.

“The fireman just work today only. They don’t do nothing yesterday,” said Michael Thao, who along with three other Hmong men and women on Tuesday evening were hosing down smoldering juniper trees, brush and burning greenhouses with a hose connected to the back of a water truck. 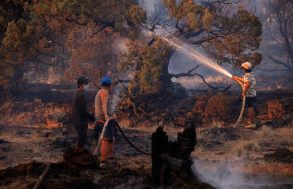