Argentina: The Unicameral began to try to adhere to the law on the medicinal use of cannabis

In a joint meeting, three Unicameral commissions began to deal with the proposals for adhesion of the Province of Córdoba to National Law 27,350 on “Medical and Scientific Research on the Medicinal Use of the Cannabis Plant and its derivatives.”

Members of the General Legislation, Human Health and Prevention, Treatment and Control of Addictions commissions participated in the meeting .

When presenting his initiative, the legislator Miranda made a review about the regulatory provisions that arise from the enactment of the Law in 2017 . When referring specifically to his project, the parliamentarian highlighted the importance of “guaranteeing free and free access to citizens, scientific development, and controlled self-cultivation” of cannabis.

His proposal also includes the creation of a provincial medical cannabis laboratory, as well as a user registry that protects the identity of the recipients of the oils and derived products. In the same way, it promotes the creation of an advisory council for the therapeutic use of cannabis, made up of different institutions and organizations involved in the subject.

Franco Miranda invited his peers to work on a bill that “is broad and generous.” “Many families need us to work the best law to give the best response to these adverse health situations,” stressed the co-author of project No. 29,563.

Meanwhile, the fundamentals sent by the Provincial Executive are based on the transversal axes of the national regulations. These refer to production, prioritizing the “eventual industrialization through public laboratories” and the “provision” of oil and / or its derivatives free of charge to persons registered in a national registry. The provinces will be able to adhere through “agreements that are celebrated with the Enforcement Authority” assigned to the Ministry of Health of the Nation.

In turn, the legislator Luciana Echevarría said that the three initiatives “are perfectly compatible” and stressed the need to “listen to all voices, to all sectors”, in particular to those civil organizations “aware of the realities and issues specific that must be reflected ”.

After presenting their questions and positions, the legislators agreed to advance a text that unifies the three projects and the specific contributions, while defining an agenda for future meetings with health authorities and related organizations.

The meeting was chaired by legislators Julieta Rinald i (General Legislation) and Silvia Paleo (of Prevention, Treatment and Control of Addictions). 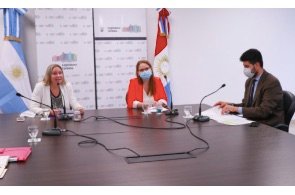