The same question we have been posing for the last 3 years. Great to see somebody else agrees.

We must remember he isn’t the only one. Plenty of other political carbetbaggers out there waiting to rake in the cash on something they have been saying for years nobody else can have.

Nine years ago, the New York Times was accusing John Boehner of racism. Now it’s eager to lap up every drop of vomitous bile from the former Republican House Speaker.

When Boehner asked Obama to move his speech by one day to avoid clashing with a Republican debate, NBC political analyst Richard Wolffe suggested that Boehner only did it because of “the color of his skin”. Wolffe meant Obama’s skin, not Boehner’s, which always looks like spoiled meat served in some blackmarket back alley cafe in Havana.

Since then Boehner has followed the usual career track of former RINOs from “worse than Hitler” to “sleazy lobbyist” to “author of unnecessary memoir bashing Trump”.

Boehner’s memoir On The House, like his political career, has no reason to exist. Even when he occupied one of the most powerful elected positions in the country, Boehner was mostly notable for looking like he was on the edge of tears. That and the time his bartender was arrested for wanting to poison him. That seemed unnecessary as Boehner was doing the job for him.

“If you’ve got a long night ahead of you, you usually find that drinking liquor for several hours is pretty much unsustainable. Plus, nothing that sweet can be good for you in the long run. And so I settled on wine. Drinking wine is a marathon, not a sprint, and makes sense for the more mature drinker,” Boehner writes in On The House.

This sort of thing might be more interesting if Hunter Biden hadn’t set the bar pretty high and it’s not what the American subsidiary of an English subsidiary of a German publishing giant is paying the weepy politician for. And so Boehner’s interviews are littered with “exclusives” about how much he hates Republicans. Even there, On The House is a failure. Boehner left office before President Trump’s shocking victory and his Trump-bashing comes from cable news.

On The House tries to settle grudges against Freedom Caucus members and Senator Ted Cruz from a decade ago that, like everything Boehner has to say, no one cares about.

All that’s left is for Boehner to join the roster of ‘ex-racists’ touting Biden. When the slimy ex-speaker calls Biden a “good guy”, that’s not an endorsement anyone would want.

And when Biden quipped that he “loved” Boehner, that’s almost as bad.

What’s there to love? Let’s forget the booze and go right to the pot.

While Boehner can be found addressing the Bank of Montreal, the Edison Electric Institute (an electric company lobby), and a Portland life insurance company offering services to the “ultra-affluent” for pay, he’s better known for going to pot.

Boehner, who had opposed drugs as an elected official, received the high honor of heading up the National Cannabis Roundtable to lobby for drug legalization. The former House Speaker came by the position naturally since he was already on the board of Acreage Holdings.

Acreage Holdings has one of the biggest marijuana operations in America. As Democrats began to legalize drugs in select states, companies were formed to get in on the action. But despite all the hype, the marijuana business was a disaster.

Acreage tried opening operations everywhere only to pull back. The marijuana company suffered $286 million in net losses in 2020. But there was some good news.

Canopy Growth, a Canadian company, controlled by Constellation Brands, a liquor company which owns everything from Svedka Vodka to Robert Mondavi, has a deal to buy Acreage on the condition that marijuana is federally legalized in the United States.

And the only way that could happen is with a Democrat in the White House.

As one headline bluntly put it, “Canopy Growth Is Headed to $0 Without a Biden Victory”.

“Canopy Growth, will need U.S. federal legalization to survive. Without it, the marijuana company’s negative cash flow will eventually bankrupt it,” the Investor Place article pointed out. “Four more years of a Trump presidency, however, would push CGC over the edge… CGC will likely close its doors before the 2024 election comes around.”

Fortunately, Biden had promised to legalize pot, and “Senator Kamala Harris… introduced the Democrat-championed bill that would essentially legalize marijuana on the federal level.”

But, “the MORE Act will need a Democratic-controlled White House and Senate to pass.”

Acreage and its investors needed President Trump and Republicans to lose across the board. And they need to retain control of the House and Senate long enough to legalize marijuana.

What’s at stake for Boehner? A lot.

Boehner had 625,000 shares of Acreage at the time the article was written and it noted that, “if his former colleagues in Congress help make marijuana federally legal, he’d be eligible to receive Canopy shares worth about $16 million.”

A New York Times article wrote that, “Boehner’s pro-weed epiphany coincides with the prospect of a payday as high as $20 million.”

That’s a lot of money. And to collect all that drug money, Boehner needs Republicans to lose.

Who was Boehner going to back in the election? Not the Trump administration which had tossed Obama’s pro-marijuana Cole memo which had been used to build a new drug industry.

And not Republicans who aren’t friendly enough to his new drug industry friends.

Boehner is a founding board member of the National Institute for Cannabis Investors, where he could be seen on video assuring investors that the ban on pot is almost over and the money is about to come pouring in.

“Speaker Boehner has the inside track on the future of this green gold rush” a 2018 promo titled for an event titled, “American Cannabis Summit: Countdown to Legalization”.

Federal legalization of pot would be Acreage’s salvation and for that to happen, the Democrats need to maintain control of the government.

If Boehner’s financial situation hasn’t changed significantly, there are millions at stake.

Defeating Republicans in 2020 and 2022 would be in his financial interest.

All of this is at odds with Boehner’s feeble attempt to build a reputation as a principled legislator decrying the fanatical excesses of House conservatives. Boehner has no principles.

You can see why Biden loves Boehner. And why Boehner loves him back.

The media doesn’t want to puncture the spectacle of the sleazy sad sack doing a tour for a book no one wants and taking the same old cheap shots at President Trump and Republicans by asking him how much money was at stake for him in Biden’s win. And how much money is at stake if Republicans lose again in 2022 and Democrats hold on to control of the government?

That would be awkward. After falsely calling Boehner a racist for years, media outlets are happy to nod along as he launches into the same talking points we’ve heard from Kasich, Schwartzenegger, and the rest of the RINO gang who can’t wait to talk about the golden days.

It’s cynical, dishonest, and sleazy. But compared to selling drugs, it’s actually not that bad. 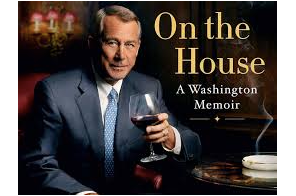