An alleged cannabis cultivator is charged with the shooting murder of a man who broke into a Melbourne crop house and set off a silent alarm.

Albert Biba allegedly shot 28-year-old Andrew Toumayan in the chest as he and his friend left the Ringwood crop house in the early hours of April 17, 2018.

Mr Toumayan screamed, ran around the corner and collapsed in the driveway of a nearby home where he died, prosecutor Angela Ellis told Victoria’s Supreme Court on Monday.

Biba, 33, is standing trial charged with murder and cultivating a commercial quantity of cannabis at the house.

Ms Ellis said Mr Toumayan and his friend went to the house intending to steal cannabis, but left after about 15 minutes without taking anything.

Mr Toumayan had knocked on the door and when no one answered, used an iron bar and secateurs to get inside.

The duo set off a silent alarm attached to a hallway chair, the prosecutor said.

The court was told the alarm sent alerts to a phone used by Biba’s associate, who helped maintain and monitor the crop house.

The associate then contacted Biba, whose rented four-wheel drive was subsequently captured on CCTV being driven from his Box Hill apartment to Ringwood, Ms Ellis said.

Biba is alleged to have shot Mr Toumayan as he left through the crop house’s front gate.

Ms Ellis said forensic evidence linked to Biba and his associate was detected on items at the crop house including cigarette butts, a Nurofen blister pack, TV remote and fork in the sink.

She added more than 74kg of plants were seized, nearly three times what police considered to be a commercial quantity of the drug.

The prosecutor is expected to continue outlining the case to the jury on Tuesday before Biba’s defence barrister Robert Richter QC gives his reply. 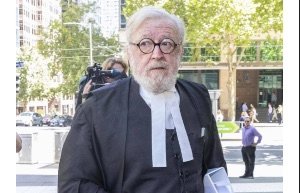