“In wanting to do it myself, take advantage of it, I have tried to explore what it actually does. And there’s no doubt that it is quite well agreed that it increases the activity in the brain,” Mr Robb told 7.30.

For our US readers  just a quick political note the Liberal party = The Republicans and we shouldn’t get too excited by his conversion on the road to Damascus as the idea of  using psychedelics as a “recreational” option is still a no no.

We would argue that the difference between “therapy” and “recreational” is splitting hairs as anybody who has had experience of psychedelics is fully aware.

“I understand that because it had such a bad rap in the 60s, the misuse of these drugs for recreational purposes had a very bad effect,” he said.

Mr Robb is advocating for “limited amounts [to be] available for the medical profession to use in a controlled medical situation to alleviate mental health diseases”.

“What we’ve seen is over 150 clinical trials take place. In the last 20 years, we’ve seen over 3,000 people, patients, involved in these trials, and the results are spectacular,” Mr Robb said.

“They’re getting up to 60 to 80 per cent remission. This is not relief, this is remission.

“Now, those sort of results are not possible [with current medications] … At best, 30 per cent of people in Australia will respond to the antidepressants. So you get 70 per cent who are not responding. And we need to have alternatives.” 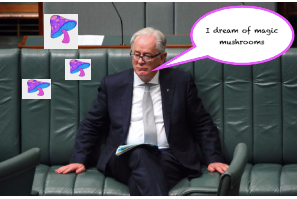