Firstly a note for our North American readers. The ACT is where Canberra Australia’s political capital Canberra is based. Think DC as in Washington DC. There’s been ongoing discussions in the ACT chamber about relaxing the rules on personal cannabis consumption and growing plants in the territory. Next week we should know what has been agreed upon. “The bill, which would legalise the possession of 50 grams of cannabis for adults, was introduced by Labor backbencher Michael Pettersson about a year ago.It will come back before ACT Parliament on Wednesday for final debate and a likely vote.”

Laws that would legalise cannabis for personal use could be passed next week but the government has warned possessing and growing the drug could still carry a risk of prosecution.

The ACT government will introduce amendments to the private members bill it hopes will resolve those potential conflicts with Commonwealth law.

The government has also flagged the possibility of the federal government intervening to override the laws.

The bill, which would legalise the possession of 50 grams of cannabis for adults, was introduced by Labor backbencher Michael Pettersson about a year ago.

It will come back before ACT Parliament on Wednesday for final debate and a likely vote.

The bill that would legalise cannabis for personal use in the ACT could be passed next week. Picture: Marta Pascual Juanola

The government released its response to a report examining the proposed laws on Thursday, indicating a number of amendments it intends to make to Mr Pettersson’s bill.

The government would cap the number of plants that could be grown at each house at four.

As the bill stands, there’s no limit on the total number of plants per household.

It would also amend the bill to allow each person to possess two cannabis plants, instead of the current four.

The amendments will include requirements to keep cannabis out of reach of children and to make smoking near children an offence.

Growing cannabis in places like community gardens will not be allowed.

In an attempt to make the bill more compatible with Commonwealth laws, the government will introduce amendments that would keep possession and cultivation of cannabis in the Drugs of Dependence Act.

Anyone over the age of 18 years of age would be exempt from the offences.

“It is important to note that, even after the passage of this bill, possessing and growing cannabis will carry a degree of risk arising from interactions between territory and Commonwealth law,” the response said.

“We believe the ACT is able and entitled to make our own laws on this matter.

“However, we would be the first jurisdiction in Australia to legislate in this way, and the interaction with existing Commonwealth law remains untested.

“The amendments proposed by the government aim to reduce the risk to individual Canberrans but cannot remove this entirely.”

The government said there was uncertainty around how the Commonwealth would react to the passage of the bill.

“We cannot guarantee the Commonwealth government would not intervene to prevent reforms – as has occurred in the past when the ACT has attempted nation-leading progressive reform on issues like marriage equality,” the report said.

Of the 16 recommendations made by the committee, the government only agreed to four.

The committee had suggested allowing group cultivation and allowing hydroponic cultivation, both of which were rejected by the government.

It also recommended the government intervene in any prosecution by the Commonwealth of ACT residents, but the government said it would consider appropriate steps as the bill was implemented.

“The government acknowledges that changes to the legal framework for personal use of cannabis of this kind have not been tried in Australia before,” the report said.

“Notwithstanding the above amendments, there remains a degree of uncertainty and risk associated with the proposed new approach.”

Mr Pettersson said he would bring the bill back for debate on Wednesday when a final vote was likely.

“In order to reduce harm and stigma, we need to make sure that people can feel free to come forward and get help,” he said.

“In order to do this, we need to remove the penalties and charges associated with the possession and use of small amounts of cannabis.

“This response recommends amendments to the bill around plant numbers, smoking in a public place and on other matters. I believe these amendments are measured and designed to ensure police can continue to do their job properly.” 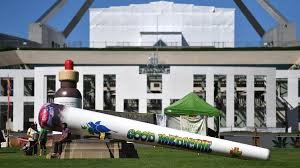