Firstly.. who / what is the Pennington Institute?

Our story begins in the 1980s with the establishment of the first needle and syringe programs (NSPs) to avert the rapid spread of HIV among injecting drug users that had occurred overseas.

This strategy, along with the formation of the National AIDS Task Force – spearheaded by Emeritus Professor Penington – saved countless Australian lives, our economy many millions of dollars and remains a widely-celebrated example of how to respond to an acute public health crisis.

Our very first incarnation, the Needle Exchange Workers Network (NEWN), contributed to that success and to Australia’s reputation as an international leader in HIV/AIDS.

NEWN was formalised in 1995 as the Association of Needle Exchanges (Anex). Anex held regular meetings of NSP service providers, an annual conference and published the highly regarded Bulletin, providing the sector with peer support as well as information about best practice and emerging drug trends.

Anex’s close connections to the frontlines provided unique insights into the impacts of laws and policies on people who use drugs. Increasingly, Anex came to involve itself in policy debates.

This expansion of Anex’s activities led to the creation in 2014 of Penington Institute.

Since then, Penington Institute has led from the front in calling for evidence-based drug policies that keep individuals and communities safe and healthy. This thought leadership has been especially prominent in many of our ongoing projects and campaigns, such as Australia’s Annual Overdose Report and International Overdose Awareness Day, and in our work together with government, such as providing the Australian Government with the model that informed its three-state Take Home Naloxone Trial and in our Victorian Government-funded digital campaign to support young people who are using or contemplating using ice, Understanding Ice.

Drawing on its rich history while constantly striving to reduce the impacts of problematic drug use, Penington Institute will continue making significant contributions to the national and international debate around drugs well into the future.

This week they have published their Cannabis In Australia report.

The pace of change across the world in the understanding of cannabis and its regulation and management has accelerated dramatically in recent years. Many jurisdictions are providing regulated access rather than simple prohibition with medicinal cannabis now mainstream

in many countries. In Australia a shift to diversion from the criminal justice system more than 20 years ago was led by the Howard Government. More recently, significant reform to enable national medicinal cannabis access was introduced by the Abbott Government.

The Australian community’s perspective continues to evolve
but is sometimes undermined by a lack of access to evidence, misunderstanding and even misinformation. Penington Institute
is committed to improving the management of drugs through community engagement and knowledge sharing and so I am pleased to share with you Penington Institute’s latest report, Cannabis in Australia 2022. Our inaugural report on cannabis presents the findings

from many months of research and around 100 expert interviews, which we have condensed into a concise overview of cannabis use in Australia today.

In the landscape of psychoactive drugs, cannabis occupies a unique place. Once considered enemy number-one by proponents of the ‘war on drugs’, cannabis is still illegal to possess or use without a medical prescription in Australia, with the limited exception of the ACT. Despite its legal status, cannabis is readily available with more than a third of Australians over the age of 14 admitting to having used it.

Compared to other common drugs, cannabis has a low harm profile with negative health impacts less than those associated with nicotine and alcohol. In the context of medicinal use, the potential for serious side effects such as dependence pales into insignificance when considered alongside the painkillers and sleeping pills that are routinely prescribed across Australia.

Cannabis can have negative consequences including a risk of dependence for some people, however the demonstrated harms and enormous financial burden associated with Australia’s simplistic prohibition approach is much more harmful than the substance itself.

Then there is the economic question. While we invest taxpayer dollars on a prohibition model – more than $1.7 billion on cannabis-related law enforcement was spent in 2015-16 – Australians in need are too often unable to afford medicinal access. The quality of Australian-grown cannabis is world-standard, but our farmers are forced to stand by and watch as producers in North America and elsewhere seize the markets that could be theirs, including our domestic market. Onerous regulations and a lack of government investment are holding the Australian industry back from this significant opportunity.

This report aims to promote understanding of cannabis in Australia. At the forefront of discussion should be the questions of how to improve medicinal access for those who need it and how we can better reduce the harm caused by our laws and the substance itself as we progress toward a more informed and compassionate community. 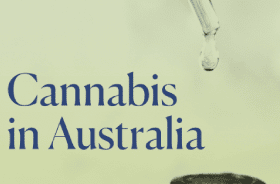