It’s all a bit of a schmozzle.

The owner of a suburban cafe accused of selling cannabis-laced brownies allegedly told police one of them “must have got mixed up” with others he sold at his business, the Perth Magistrates Court has heard.

Nathan Sharp, the owner of Bada Bing cafe in Woodlands, is on trial on two charges of selling brownies containing marijuana to a Perth family in March 2019.

The court heard one of the brownies was eaten by Sharon Hoysted and her two young children Thomas, 3, and Emily, 5, who later complained that her “eyes weren’t right” and “she felt like she was in the TV”.

She and her brother were taken to the Perth Children’s Hospital where blood and urine tests found tetrahydrocannabinol, or cannabis, in their system.

Prosecutor Peter Gillett said the children’s father Michael Maxwell, who was with them at the cafe, did not eat any of the brownie and tests on him found no traces of cannabis in his system.

He returned to the cafe the next day and bought another brownie, which Mr Gillett said was analysed by the ChemCentre and also found to contain tetrahydrocannabinol (THC).

Brownie ‘fell off fridge or freezer’

The court was told that when contacted by police six days later, Mr Sharp is alleged to have told them he made brownies with cannabis butter “given to him by a friend”.

He said “one must have fallen off the fridge or freezer and got mixed up with the ones used in the shop”.

Two months later, he is alleged to told an environmental health officer from the City of Stirling that he had been given cannabis brownies, but he had never brought them to the cafe.

He also maintained cannabis brownies were never made on his business premises.

Mr Sharp has denied any wrongdoing, and his lawyer Tom Percy QC said no one else who attended the cafe on the same day reported being affected.

This was, he said, “indeed a curious situation.”

Mr Percy said there was no suggestion that Mr Sharp “personally” had anything to do with the sale of the brownies.

He also noted that the “goods in question were never sold”, because CCTV footage showed the family “left the restaurant without paying”.

Mr Percy said there were other problems with the evidence, including that some of it had been gathered under the wrong legislation and it was therefore inadmissible.

He said the comments alleged to have been made by Mr Sharp to police and the environmental health officer were not recorded and therefore were also inadmissible. 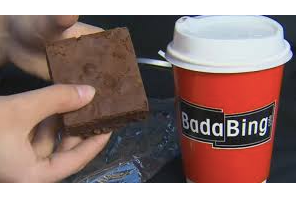