It’d be nice to believe but here at CLR we’d be very wary about anything that comes out of his mouth….

Speaking on KIIS FM’s Kyle and Jackie O Show this week, Joyce was asked by host Kyle Sandilands to ‘cast his eye’ over the legalisation of marijuana.

He replied: “Obviously, police running around chasing people doing that [recreational cannabis], they’ve got other things on their plate.”

When Sandilands urged him to “worry about bigger crims, don’t worry about us pot smokers, I mean ‘those’ pot smokers, not ‘us’”, Joyce warned the shock jock: “I’ll listen to you closely and, if I can hear you open up the chocolates and chewing through the Tim Tams, I’ll know what’s going on.”

Co-host Jackie O claimed the exchange showed Joyce was “open to the conversation” about recreational cannabis.

“That’s the first time we’ve ever had a politician say ‘I’m open to it’,” she said. “Is that what he said or am I putting words into his mouth?” 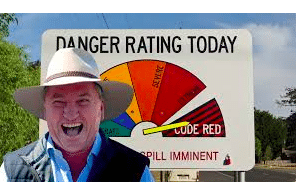