Beto O’Rourke Has Written A Plan For Cannabis

Also he’s even doing this ….

Former Texas Rep. Beto O’Rourke visited a marijuana dispensary in Oakland, California, on Thursday and presented his sweeping legalization proposal, which includes directing revenue from a federally regulated industry towards reparations for those who faced served time for non-violent marijuana offenders. O’Rourke said these individuals would receive grants of about $1,200 per month served in jail or prison.

The plan appears to be the most progressive and detailed on the issue among the top 2020 candidates and draws contrasts with front-runner former Vice President Joe Biden, the only one to stop short of supporting full federal marijuana legalization. Biden supports medicinal legalization, decriminalization for recreational and expunging prior marijuana convictions. 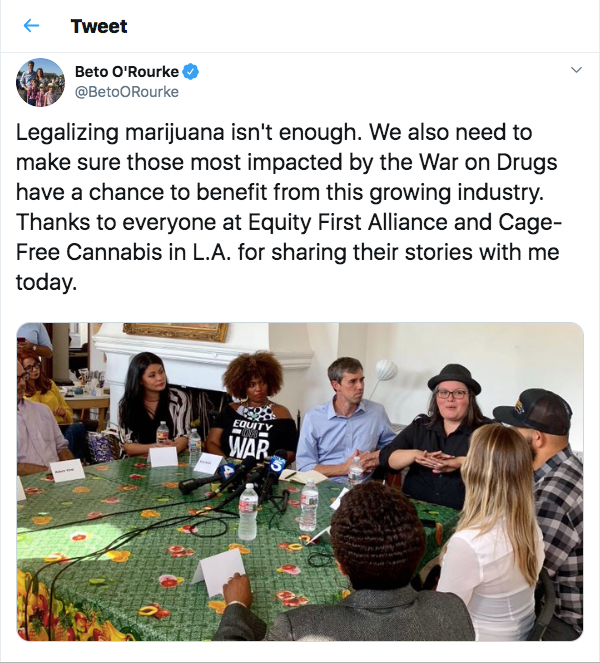 CNN reports …….Former Rep. Beto O’Rourke called for the legalization of marijuana nationwide Monday in an email to supporters that comes ahead of an expected bid for the 2020 Democratic presidential nomination.

The former Texas congressman’s call came as part of a series of criminal justice proposals he said would “build a criminal justice system that is more fair and that urgently puts our country closer to the words written above the highest court in our land: equal justice under law.”
His lengthy email — to the massive list he leveraged to raise $80 million in last year’s Senate contest — detailing the series of criminal justice reforms is a sign that O’Rourke is beginning to roll out a policy platform ahead of a 2020 presidential campaign.
Read the full CNN report https://edition.cnn.com/2019/03/04/politics/beto-orourke-marijuana-legalization-2020-president/index.html
This is what he says he will do

As President, Beto will:

End The War on Drugs

In 2017, there were more than 650,000 marijuana arrests in America, with 90.8% of them being only for possession. These arrests, for decades, have disproportionately targeted black and Latino individuals, and research shows that for the same crime prosecutors pursue a mandatory-minimum sentence twice as often for black Americans than white Americans.

Invest revenue from the marijuana industry

Invest revenue from the marijuana industry in communities impacted by the War on Drugs through “Drug War Justice Grants” and Equitable Licensing Programs. The criminalization of marijuana has disproportionately impacted communities of color – time away from family, tarnished records, and economic opportunities lost. The War on Drugs became a war on people – and those people deserve justice. Here’s what we know: not only are people of color more likely to be stopped, arrested and convicted of drug-related offenses, but they are more likely to receive harsher sentences that have lifelong consequences impacting their employment opportunities, housing, public assistance, and their right to vote. Legalizing marijuana will generate massive revenue for those positioned to capitalize on its demand among Americans. Unfortunately, those who have borne the brunt of misguided tough-on-crime policies are not likely to benefit from that economic activity. A 2017 survey of marijuana business owners found that only 19% identified as non-white.

To guarantee that opportunities to profit from a regulated marijuana market are made available to communities disproportionately impacted by the War on Drugs, Beto will: 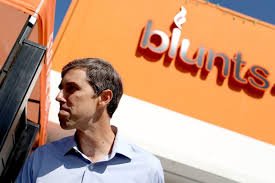