Hemp Grower reports on yet another possible Biden cabinet member who may help the world of hemp & cannabis.

According to various press reports, on Dec. 8, President-Elect Joe Biden nominated Tom Vilsack as Secretary of Agriculture, a move that many hemp advocates argue is good for the industry. Vilsack held the same role under President Obama, from 2009 to 2017, after serving as governor of Iowa from 1999 to 2007. If confirmed, Vilsack would replace Sonny Perdue, who has overseen the U.S. Department of Agriculture (USDA) under President Donald Trump since April 2017.

“Vilsack is a long-time champion of hemp, and we cherished our strong working relationship during his previous stint in that position,”

Jonathan Miller, the general counsel to the U.S. Hemp Roundtable, said. “We are incredibly optimistic that he will help provide the leadership and clarity necessary to unlock opportunity in the hemp industry.” 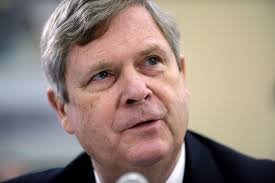