More states are passing laws that give organized labor a leg up in the nation’s booming cannabis industry, but there’s a lurking possibility that legal challenges could wipe the spreading pro-union initiatives off the books.

Already this year, New York, New Jersey, and Virginia joined California by enacting recreational cannabis laws that limit the ability of employers to interfere with union campaigns to organize their bud tenders and other marijuana workers. A handful of others are mulling laws to boost unions.

The laws vary but generally require companies to take a hands-off approach to union organizing efforts in exchange for state permission to sell cannabis. That may run afoul of a U.S. Supreme Court ruling that bars state laws from regulating certain elements of labor-management relations in the private sector, labor law observers said.

The legislative push comes as the public warms to reforming cannabis laws. Medical marijuana is now permitted in 35 states, and recreational use is legal in 18 states and Washington, D.C., though legal sales still haven’t begun in some places. South Dakota’s recreational law is paused by a court challenge now before the state supreme court, and the Mississippi Supreme Court is considering the voter-approved medical cannabis law passed last November. 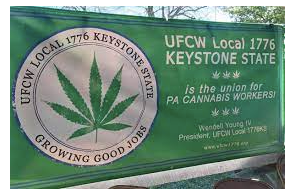