He may well be growing cannabis as hemp is used as the standard term for cannabis in most of southern africa. What ever he is growing…. it isn’t a good look for a former government minister.

The former Minister of Agricultural Development and Food Security, Patrick Ralotsia wants a case in which the Botswana Police Service (BPS) is investigating hemp or dagga ‘farming’ at his Kanngwe farm to be thrown out.

Ralotsia is caught up in the investigation, as BPS wants him to produce ‘evidence’ in the dagga case.

Police have instructed Ralotsia to produce a Lease Agreement entered into between himself and Fresh Standard (Pty) Ltd and have it  presented it to senior Superintendent Moatlhodi Ntuane.

BPS also wants Ralotsia to provide any other document that may be necessary in the investigation of the unlawful cultivation of 32 dagga plants at Kanngwe farm, allegedly for narcotic or psychotropic purposes that Fresh Standard planted.

A rule nisi was granted to BPS early September after an ex parte application was made by BPS and was to be reviewed on September 18, but to date the matter is yet to be argued.

In his affidavit, Ntuane states that he needs the information from Ralotsia for the purposes of investigations and or any other information that will assist in establishing the lawful ownership of the farm.

According to court papers, Ralotsia’s attorney, Kgosietsile Ngakaagae will raise points in limine arguing that the order prayed for by the applicant is overly broad and lacks specificity to be capable of both comprehension and compliance.

He further argues that Ralotsia has not been served with founding papers, let alone the court record,on the basis of which the rule nisi was obtained.

He will also argue that the BPS choice of process, an ex parte application, is not an appropriate process for the application and constitutes abuse of process.

“The essence of the order, as ought, would be to compel Ralotsia to help the police to investigate himself. That violates his right against self- incrimination. The sought order, infringes upon Ralotsia’s right to silence, and further offends the judge’s rule. The application lacks statutory basis. It does not find anchorage, on any provision of the Criminal Procedure and Evidence Act, or any other law,” read the court papers.

Ngakaagae wants the rule nisi be discharged, the application be dismissed and for the BPS to pay cost of application on Attorney-Client Scale.

Ngakaagae on Friday expressed displeasure at the drag of the matter, as Ntuane was not in court, said to be on quarantine after one of his colleagues tested positive to the coronavirus.

He argued that the State should have asked someone to stand in for Ntuane for the matter to progress as the case is causing costs, anxiety and continuing embarrassment to his client. The matter will be heard in a fortnight. 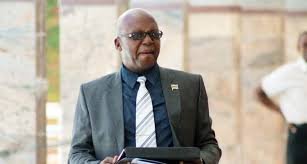