Fábio Mitidieri is the author of Bill 399/2015, which aims to enable the commercialization of medicines that contain extracts, substrates or parts of the Cannabis Sativa plant in its formulation

This Wednesday morning (28), the federal deputy, Fábio Mitidieri (PSD-SE) participated, live, in the Congressional Program of TV Alese. The congressman is the author of Bill 399/2015, which aims to enable the commercialization of medicines that contain extracts, substrates or parts of the Cannabis Sativa plant in its formulation.

If approved, the proposal will change art. 2 of Law nº 11.343 of 2006, of the National Public Policy System on Drugs, Sisnad. Since 2018, the proposal has been discussed by a special commission on the subject and has as deputy Luciano Ducci (PSB-PR) as rapporteur. At the time of the interview, deputy Fábio Mitidieri defended the project and spoke about the quality of life of people who need the medication they will have.

“This project is very important for the population, as it deals with the regulation of cannabis for medical use. In addition to the real benefit it has, the project also breaks prejudices ”, emphasized the deputy, suggesting that people know more about the product to understand the importance of regulation in the country. “Patients who use cannabis for medical purposes, and their families, are familiar with the numerous benefits that the plant can provide to those who deal, on a daily basis, with serious diseases such as epilepsy, cancer and neuropathic pain”, he detailed.

The deputy recalls that many people turn to the courts to purchase the medicine. He points out that there is a complaint from the evangelical group about planting. “As for the planting item, which is a big controversy at the Evangelical Bench, it will have control, be regulated, authorized by Anvisa and inspected by the Federal Police. The regulation will allow the medicine that today reaches R $ 3,000.00, to be purchased for R $ 500.00. And also, with the possibility of being included in the Unified Health System (SUS) at a lower price. Those thousands of Brazilians who buy the medicine at a gold price, will buy it through SUS, or even at the pharmacy with a more affordable price ”, he declared, congratulating the PL rapporteur who added in the text the clarity of this control in planting.

The project allows cannabis to be grown only by legal entities, with authorization from a government agency and with a pre-contracted quota and with a predetermined purpose. The project does not authorize recreational use, allowing only the production of inputs for medical and industrial purposes.

It also reinforced the positions of the federal deputy, professor at the Federal University of Sergipe (UFS), Wellington Barros da Silva, who is a consultant to the Federal Pharmacy Council. He greeted Congressman Fábio Mitidieri for defending the Bill. “I congratulate the Congressman for his courage and social sensitivity in dealing with such a relevant issue that brings health and economic impacts to society,” he said

The professor stressed that the project brings advances to the quality of life of patients, however, he assesses that the current scenario of the use of cannabis – even in the face of Law No. 11.343, of 2006, which is the responsibility of the Union to authorize its planting, its culture and harvest, through inspection – it was not satisfactory.

“Brazil has made little progress since 2006, as we have not progressed with regulation. The deputy’s bill represents the advance in regulation, benefiting patients who need to use these medications ”, he declared. 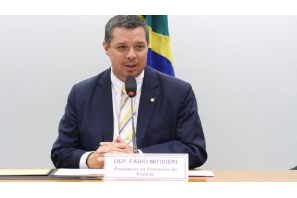