Brazil: Report on PL 399/2015 to be presented on 20 April at the Special Commission @ Legislative Chamber

Outline: Commission in operation; Waiting for the Rapporteur’s Opinion in the Special Committee destined to issue an opinion on Bill No. 399, 2015, by Mr. Fábio Mitidieri, which “alters Article 2 of Law No. 11,343, of August 23, 2006, to make commercialization feasible of medicines that contain extracts, substrates or parts of the Cannabis sativa plant in its formulation “(PL039915)

The report of the substitute for PL 399/2015 will be presented on April 20, in a meeting that will be convened by the chairman of the Special Commission on Medicines Formulated with Cannabis, deputy Paulo Teixeira (PT-SP) .

The information, obtained exclusively by Sechat , was confirmed this evening (6) by the deputy adviser.

The special commission, created in June 2019, by an act of the ex-mayor, Deputy Rodrigo Maia (DEM-RJ) , has the mission of modifying PL 399 – which will regulate the cultivation, processing, research, production and commercialization of cannabis-based products for medicinal and industrial purposes -, originally presented by deputy Fábio Mitidieri (PSD-SE) .

In practice, the convening of the first 2021 meeting of the Special Commission dealing with PL 399/2015 represents the continuity of the project’s progress in the Chamber of Deputies, a fundamental and mandatory step for the outcome of the topic . In 2020, due to the beginning of the pandemic of the new coronavirus, the process of the proposal in the Legislative was hampered.

Now, if it is approved by the Commission – which in principle should happen easily -, the project goes straight for discussion in the Senate, without having to go through the vote in the plenary of the Chamber. However, a request with up to 51 signatures of deputies may require that the discussion also be made by all parliamentarians before the text goes to the Senate.

Deputies will be summoned this Wednesday (7) to a meeting

This Wednesday (7) morning, the 38 deputies who are full members of the Special Commission will be receiving the invitation to the meeting on the 20th, which should take place in a hybrid format: with face-to-face and remote participation. The meeting to read the opinion on the substitute for PL 399/2015, which will be presented by deputy Luciano Ducci (PSB-PR) , rapporteur of the project, is not a formal phase of the process, being more of a customary procedure that it is generally adopted by some special committees to make the conclusions public. However, the presentation of the report is a formality in the processing of the project.

As of the presentation of the report, a deadline for submitting amendments to the substitute is opened. This deadline is five plenary sessions of the Chamber, which may take between 15 days and a month. In case of receipt of amendments, the rapporteur will have to present a new opinion that accepts or rejects the proposals to modify its text. Only after this stage will the rapporteur’s opinion, this time final, be voted on by the committee. “Even after the deadline for amendments has ended, the vote on the opinion does not need to be immediate. It will depend on the presentation of the opinion to the amendments ”, revealed a source heard by Sechat. 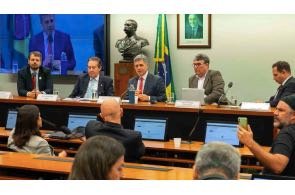