Great to see that she’s out but now Bout is a free agent (of sorts) to source  more weapons  for the Russian govt to turn Ukraine into a never ending quagmire of death.

The swap, at a time of heightened tensions over Ukraine, achieved a top goal for Joe Biden but carried a heavy price and left behind an American jailed for nearly four years in Russia.

The deal, the second such exchange in eight months with Russia, procured the release of the most prominent American detained abroad. Griner is a two-time Olympic gold medalist whose months-long imprisonment on drug charges brought unprecedented attention to the population of wrongful detainees. Paul Whelan, a Michigan corporate security executive, has been jailed in Russia since December 2018 on espionage charges that his family and the US government has said are baseless.

Biden’s authorization to release a Russian felon once nicknamed “the Merchant of Death” underscored the escalating pressure that his administration faced to get Griner home, particularly after the recent resolution of her criminal case and her subsequent transfer to a penal colony. 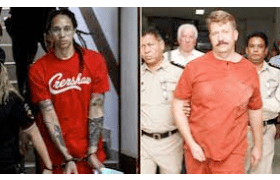