First NZ and now Germany. It hasn’t been a good 72 hours for cannabis legalization

The rejection came despite the fact that a majority of the members of the Bundestang belong to a political party that favors some type of reform.

Legalization efforts during this legislative period are extremely unlikely because:

The rejected bill was tabled by the Green Party and had the support of only The Left party. The votes of the two parties combined fell short.

FDP legislators spoke in favor of legalization but didn’t agree with the specific bill presented by the Green Party – preferring a more hands-off approach to legalization.

Wieland Schinnenburg, drug policy spokesman for the FDP, said his party wants a “cannabis liberty law” instead of the “cannabis control law” proposed by the Green Party, which is “full of regulations” that would prevent a future legal marijuana market from functioning.

As expected, Germany’s ruling coalition parties Union and SPD voted against the bill.

Without their votes, no legalization is likely in the foreseeable future, contrary to what some Canadian cannabis executives have been predicting.

The SPD legislators who spoke about the issue signaled support of some relaxation of cannabis laws, but they rejected the legalization bill because of “coalition discipline.”

The Union – the largest political alliance in parliament – rejected the bill because members firmly oppose any recreational marijuana reform.

Right-wing party Alternative für Deutschland (AfD) was the only opposition party that voted against the bill.

Separately, several cannabis-related motions proposed by opposition parties were also turned aside. These included proposals by:

Another Left motion, to allow a small amount THC in the blood when driving, comparable to the maximum alcohol concentration currently allowed in Germany, was sent to the Bundestag transportation committee for further discussion.

With little chance of recreational marijuana reform being passed during the current legislative period, the question becomes what could happen after the next federal elections, which is expected in about one year from now.

While it’s still too early to predict results – particularly which parties will be in the government and which ones will be in opposition – one signal is positive for adult-use cannabis reform.

Current polls indicate the Green Party is rising in popularity at the expense of the SPD.

Although both the SPD and the Green Party favor marijuana reform, recreational cannabis reform seems to have a higher priority for the Greens. 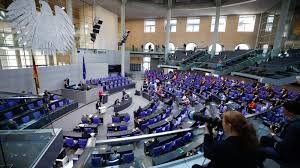