A one-time fugitive and escaped inmate has been sentenced to three life sentences in connection with the 2012 kidnapping and torture of a marijuana dispensary owner, officials announced Friday.

Hossein Nayeri, 41, was convicted last summer of two counts of kidnapping for ransom and one count of torture.

He is still facing trial for a “brazen” 2016 escape from the Orange County jail.

After allegedly orchestrating the escape with two other inmates, Nayeri allegedly kidnapped a taxi driver and forced the victim to drive to San Francisco. Nayeri and one of his co-defendants were captured after a homeless man recognized Nayeri from news coverage and alerted authorities.

At the time of the first kidnapping in 2012, victim John Doe owned a lucrative marijuana dispensary business.

Sometime before October of that year, the victim treated several marijuana growers to Las Vegas for what was described as an “extravagant and expensive” weekend trip, officials said.

One of Nayeri’s co-defendants, Kyle Shirakawa Handley, who grew and sold marijuana to John Doe, attended the trip.

Afterwards, Handley told his friends — Nayeri and another co-defendant, Ryan Anthony Kevorkian — that John Doe was very wealthy. Officials say the three men then devised a plan to rob and kidnap the victim.

A month before the kidnapping, the men allegedly surveilled the victim’s home and followed him as he made frequent trips to the desert. While John Doe regularly drove to the desert to discuss a possible investment deal, the men believed he was going there to bury large amounts of money, officials said.

Then, one week before the kidnapping, Nayeri led Newport Beach police officers on a chase after he refused to pull over for a routine traffic violation.

Nayeri crashed his vehicle, abandoned it and ran away, officials said. Police found surveillance equipment and videos inside the vehicle, which was impounded.

On Oct. 2, 2012, Handley, Nayeri and Kevorkian allegedly entered John Doe’s Newport Beach home, zip-tied his wrists, beat him severely and forced him into a van.

Authorities say the men also zip-tied and kidnapped the girlfriend of John Doe’s roommate and stole a large amount of cash.

The men then drove the victims to the desert, where they believed John Doe was hiding more cash. They are accused of torturing John Doe during the drive, by burning him with a blow torch and severely beating him for information on where the non-existent cash was located, officials said.

Once in the desert, authorities say the men mutilated John Doe by cutting off his penis and poured bleach on him to try and destroy any evidence. They then allegedly left both victims on the side of the road. The other victim, Jane Doe, was not physically harmed.

The defendants then left the area, “taking the victim’s penis with them so that it could never be reattached,” officials said.

Jane Doe eventually was able to free her feet and ran more than a mile in the dark until reaching a main road, where she flagged down a police car.

John Doe spent an “extensive period of time” recovering from his injuries in a hospital, officials said.

As part of the investigation, Handley’s vehicle was spotted in the victims’ neighborhood and police say they discovered evidence of the kidnapping and torture inside Handley’s home.

Nayeri’s DNA was found on that evidence, as was DNA from two other unidentified people.

Police later connected the video surveillance equipment and footage found in Nayeri’s vehicle to the kidnapping and torture of John Doe.

Kevorkian and Naomi Josett Rhodus (previously Kevorkian) were identified as potential suspects in the ordeal after the two were matched to the unidentified DNA profiles found in Handley’s home.

Kevorkian and Rhodus were arrested on Nov. 8, 2013, in Fresno by Newport Beach detectives. Rhodus is also accused of participating in the plan to kidnap and torture John Doe.

Officials say Nayeri fled the U.S. to Iran, where he remained for several months. Iran does not extradite suspects to the U.S., but on Nov. 7, 2013, Nayeri was arrested by the FBI at an airport in Prague while he was transferring flights from Iran to Spain to visit family. He then faced extradition proceedings in the Czech Republic.

Kevorkian, 41, and Rhodus, 40, face the same charges and face life in prison without the possibility of parole.

“What kind of human does such a thing?” John Doe asked. “The complications of pain, both physically and psychologically, which are connected to this sick act, are so profound and deep, that words cannot begin to explain the depths of my pain.”

In his comments before sentencing, Nayeri took no responsibility for what happened.

“I have many flaws. Wanting to hurt someone is not one of them,” he said.

Spitzer disagreed. Speaking to reporters outside the courthouse Friday, the district attorney called Nayeri “literally the poster child for just how evil a person can be.”

“The devastating depraved heart and extreme intelligence allowed this individual to inflict unimaginable horror on his victims,” Spitzer said in the news release. “Despite his best efforts to avoid capture, Orange County law enforcement was relentless in pursuing justice by orchestrating arrest halfway around the world, and then capturing him once again following his escape from the Orange County Jail in 2016.” 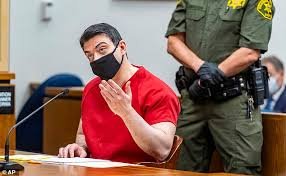