bill to legalize possession of psychedelics in California will advance to the Senate floor after clearing a major procedural hurdle on Thursday.

The legislation, sponsored by Sen. Scott Wiener (D), had already moved through two policy committees. But in order to make it on the floor calendar, it had to be cleared by the Senate Appropriations Committee as part of a large suspense file on a key deadline. Otherwise it would have been dead for the session.

There was no debate on the proposal. Rather, the chair simply said which of the hundreds bills that were on the suspense file would proceed to the floor. This means the psychedelics reform measure will be taken up by the full chamber by June 4. If it passes there it will head to the Assembly and then, potentially, to the governor’s desk.

If enacted into law, the bill would remove criminal penalties for possessing or sharing numerous psychedelics—including psilocybin mushrooms, DMT, ibogaine, LSD and MDMA—for adults 21 and older. 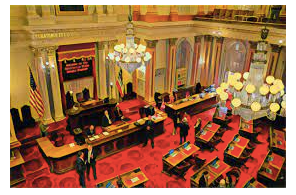