Sources reported a heavy police presence at ‘Dirty Old Sailors’ bar on st172 in central Phnom Penh on Sunday night and, today, the bar is reported to be shuttered, with an official notice affixed to the shutters saying ‘Temporary House-Room Closing by Phnom Penh Municipal Commission | Daun Penh District Police Office Anti-Drug Section – After inspecting the house-room above completely, we commission it temporarily closed.’

’ and other cannabis ‘edibles’.

The bar was also known for selling cannabis in a smokeable form and had become an open secret among expats circles as a place to score drugs.

On the bar’s Facebook page (which has now been removed), a satisfied user says of the Chocolate Chip Cake:

‘I tried that. Its amazing, tastes fantastic and a top high’

‘Awesome bar, super chilled vibe just like being in Amsterdam, one stop shop for helping anyone with 420 needs, just let them know you’re coming first’

‘Had a blast everytime in there. All kinds of interesting people and the best ”stuff” in town!! Staff and owner made you feel so welcome. Will be back for sure:)’

Some reviews of the bar are less coherent – perhaps due to the reviewer sampling ‘edibles’ :

‘It’s dark and relaxed in this room. . I’m hungry.The air-conditioning is nice. I love this playlist. Chill. There are some other people in here too, a couple of small groups of friends. A good song just came on. Did I mention how hungry I am? A young dude is dominating Street Fighter on the arcade. Ha, I never did work out why Ryu and Ken wear the same clothes and have the same moves…My mouth is really dry. Oh yeah, I’m thirsty. The bar is on my left but…but The game is on my right. I want both… I can have neither. I’m sitting. Siting makes me tired. How long have I been here? If I am a marshmallow forever and ever and ever, I’ll be a cool and soft marshmallow. This couch… Oh, it’s leather. I like leather. I’m hungry, I need some water. Oh yeah Games. Bit they’re over there and I’m here. I want to play. I can’t. I am a marshmallow and I am thousands of miles sunken into this couch. Wow, there are dogs here. Oh wait, I knew they were here. Nice dog. I like dogs. I wonder if the dogs ever wish they could play Street fighter. I like this place. It’s dark in here. A good song came on. I am a marshmallow and this couch feels really good. The bar is only s few steps away. It smells good in here. It’s dark. I like the dark. I had a couple of cookies but …now I’m more hungry than ever. Nice dog. I like dogs. Smells good in here.’

However, it appears that Phnom Penh authorities’ tolerance of ‘Cheech and Chong’ style bars has now come to an end and it may well be the end of the road for the ‘Dirty Old Sailors’ and their ‘weed’ selling exploits. 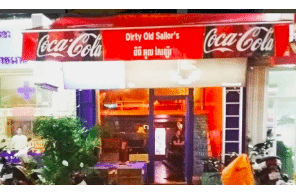