A Metro Vancouver advocate plans to open a store selling MDMA, cocaine, and more this month to coincide with the province decriminalizing possession of several types of drugs.

Jerry Martin says offering safe supply is a key part of harm reduction, and believes his new store will save lives.

“Basically we’re going to provide safe, tested drugs and that will reduce overdoses for sure,” he said.

Martin plans to stock MDMA, methamphetamines, cocaine, crack cocaine, and heroin. He’ll, of course, have to source the drugs illegally, but says he’ll ensure they’re tested and safe before selling them in his brick-and-mortar store.

He’s still ironing out the exact location since a storefront on Cordova Street recently backed out, but he’s confident the store will be operational by the time BC decriminalizes possession on January 31.

It will be called The Drugs Store and operate a delivery service called DrugsDash. Both will be subsidiaries of parent company The Safe Supply Project.

His brother died of an overdose a few months ago and he lost another brother to murder connected to the drug trade. That prompted him to become an advocate, working to shift how addiction and supply are viewed.

Martin acknowledges there’s danger in opening a store that selling controlled substances when trafficking those substances remains illegal, and says he’s prepared to be arrested. If that eventually happens, he plans to launch a legal challenge related to the Canadian Charter of Rights and Freedoms. 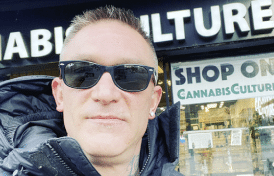