Some missed out on job opportunities. Others found it difficult to apply for loans. And while some suffered almost no effects for having a marijuana conviction or arrest on their records, one woman talked about being unable to become a homeowner.

Those were some of the stories of people attending a first-of-its-kind expungement clinic on Saturday, July 3 at Harambe Café on Tucson’s east side, as lawyers, law students and advocates from all over Southern Arizona offered their services to help guide those looking to clear their cases.

“Everyone in general is struggling,” said Michelle Ochoa, who volunteered at the event — and prepared her petition for expungement. “With housing opportunities, employment opportunities, just to get ahead, all because of a minor conviction. Like mine.”

One person who would rather not be named can relate. After a charge in 2019 for possessing marijuana, he was able to get a new job recently, but said he knows he’s lucky.

For Ochoa? That minor conviction was for possession of marijuana paraphernalia – there wasn’t any useable marijuana found, just residue. “It was insane,” she said. “And I, till this day, cannot become a homeowner because of that stupid, petty little charge.” 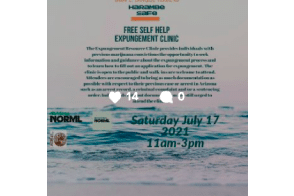