We’re surprised that LegCo has the time to discuss cannabis considering all the repressive legislation they need to rubberstamp for Beijing at the moment. It’s great to see that weed makes the grade !

Commissioner for Narcotics Ivy Law Chui-mei has slammed people with ulterior motives for encouraging the use of marijuana and claiming it is not a drug.

She also called upon public officers to behave responsibly after Islands district councillor Wong Chun-yeung said on social media that he had taken marijuana before and the item was not a drug.

However, the number of users aged 21 or below increased by 6 percent from 494 in 2019 to 525, with marijuana being their most popular.

Speaking in a Legislative Council meeting yesterday, Law said some people encouraged the consumption of marijuana just to boost earnings, pointedly singling out those who sold the drug.

She appealed to public officers – without naming Wong – to be careful in their choice of words and deeds and to be “socially responsible.”

She added: “We strongly condemn those who circulate the message online that marijuana is not a drug. The fact that marijuana is a drug has been stipulated in authoritative international reports – including that of the World Health Organization – in addition to the drug’s harmful effects.”

For Law, the increased consumption of marijuana had to do with its legalization in some countries.

She said most youngsters who consumed marijuana for the first time did so in the form of joints. 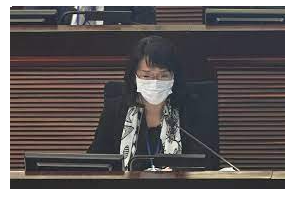