Marijuana sales haven’t yet launched in New York following the signing of an adult-use legalization bill by Gov. Andrew Cuomo (D) last month—but lawmakers are already taking steps to ensure that the market is environmentally sustainable.

Assemblywoman Patricia Fahy (D) introduced new legislation that would create a cannabis recycling program to minimize the amount of plastic pollution generated by the industry. Single-use marijuana packaging would be treated similarly to typical bottles under existing recycling policies.

The intent of the proposal, according to a memo from Fahy, is to resolve an “unfortunate externality of requirements” under the legalization bill—namely, the mandate that cannabis products are sold in child-resistant containers.” This causes the marijuana market “to have an outsized plastics footprint and to become a notable environmental consideration,” it says.

“The legal cannabis industry in the United States produces about 150 million tons of waste each year. Even when marijuana packaging is recycled at home, it is often sorted out by recyclers and taken to landfills,” the memo continues. “While no industry is blameless in the plastic pollution crisis, New York has a unique opportunity to prevent a new source of plastic pollution as we consider the legalization of recreational marijuana. 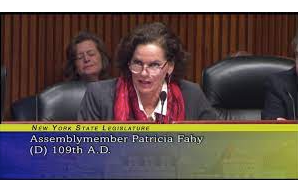