Cannabis stocks staged a strong rally on Wednesday, with most Canadian and U.S. companies posting double-digit percentage gains, buoyed by hopes the Democrats may take the Senate and pursue a more pro-reform agenda.

The sector took off after Raphael Warnock won one of two Senate runoffs in Georgia early Wednesday, according to the Associated Press, bringing Democrats a seat closer to a Senate majority. With 98% of the expected vote total reported, Democratic challenger Jon Ossoff was leading Republican Sen. David Perdue by just 0.4 percentage point, according to data aggregated by the AP.

President-elect Joe Biden and his Vice President Kamala Harris are widely held to be more in favor of reforming the U.S.’s strict cannabis laws which continue to classify the substance as a Schedule I drug, alongside heroin. That classification has hampered the development of the sector which is confined to those states that have legalized cannabis for medical or recreational use and kept companies locked out of the federally insured banking system.

Hopes for reform were already boosted by the success in November ballots of cannabis measures in New Jersey, Arizona and South Dakota, where voters approved adult-use cannabis, and Mississippi, where they voted for medical cannabis. Those measures mean about a third of Americans now live in states that have legalized cannabis for recreational use..

“We go from speculating what President-elect Biden could have done for cannabis reform via Executive Order (or by directives/”memos” from his incoming Attorney General) and if the Senate would have held a vote on the SAFE act (banking reform), to a new world, in which the question is more about the timing and scope of much broader reform for the cannabis industry,” Cantor Fitzgerald analyst Pablo Zuanic wrote in a note to clients.

“A Democratic win would imply continued positive sentiment toward federal support of cannabis reform, and, we expect, would drive further strength among Canadian cannabis stocks, especially those with clear paths to U.S. market entry,” analyst Rahul Saraugaser wrote in a note to clients. He cited as examples Village Farms, which owns 6 million square feet of greenhouse capacity in Texas, and market leader Canopy Growth Corp., which has an option to acquire multi-state operator Acreage Holdings Inc. 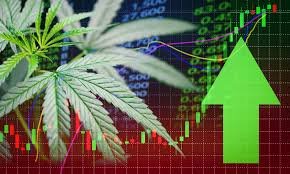