The tribal council for the Cherokee in western North Carolina voted Thursday to legalize medical marijuana on tribal lands. The tribal land will be the first area in the state with legal possession of pot.

The vote makes possession of up to one ounce of marijuana by people 21 and older legal on tribal land, called the Qualla Boundary.

It’s still illegal to grow or sell pot on the tribe’s land. But Principal Chief Richard Sneed said this vote is just the first in what will be a series of moves to legalize marijuana on tribal lands.

“There’s so much science now supporting cannabis as a medicine,” Sneed told the tribal council before the vote. “This really is a quality of life issue as well for folks who have debilitating diseases, chronic pain, chronic back pain, cancer.”

“This is really just the first step, or kind of the cornerstone of moving toward medicinal. We have to have this in place first,” Sneed said.

“The people want cannabis, the world is changing, society is changing,” Jeremy Wilson, the EBCI’s government affairs liaison, said in an earlier interview.

“We want to have dispensaries here on the Qualla Boundary and to be able to sell, but we have to start with this phase first,” he said.

The Cherokee have sovereignty and make their own laws on the Qualla Boundary, which includes about 100 square miles over five counties in western North Carolina.

“Go out and visit with some of the elders, it’s their medicine,” council member Albert Rose said before voting to approve the law.

“It’s for the betterment of our people,” French said in the meeting.

The tribal council removed part of the ordinance that would have allowed people to give away small amounts of pot without selling it. 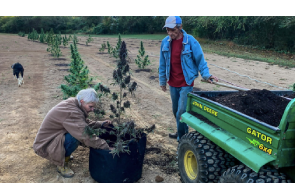