A report from Hemp today detailing Beijing’s plan for hemp in their next 5 year plan.

Before we get to the Hemp Today introduction below.

Also, it is worth remembering, how the Chinese government  builds these industries on the back of slave labor.

Yes…. these are unsavory details that those spruiking all thing China and hemp don’t want you to know but with China there’s always a kicker and it is usually a not very pleasant reality

The Chinese government has facilitated the mass transfer of Uyghur and other ethnic minority1 citizens from the far west region of Xinjiang to factories across the country. Under conditions that strongly suggest forced labour, Uyghurs are working in factories that are in the supply chains of at least 82 well-known global brands in the technology, clothing and automotive sectors, including Apple, BMW, Gap, Huawei, Nike, Samsung, Sony and Volkswagen.

This report estimates that more than 80,000 Uyghurs were transferred out of Xinjiang to work in factories across China between 2017 and 2019, and some of them were sent directly from detention camps.2 The estimated figure is conservative and the actual figure is likely to be far higher. In factories far away from home, they typically live in segregated dormitories,3 undergo organised Mandarin and ideological training outside working hours,4 are subject to constant surveillance, and are forbidden from participating in religious observances.5 Numerous sources, including government documents, show that transferred workers are assigned minders and have limited freedom of movement.6

China has attracted international condemnation for its network of extrajudicial ‘re-education camps’ in Xinjiang.7 This report exposes a new phase in China’s social re-engineering campaign targeting minority citizens, revealing new evidence that some factories across China are using forced Uyghur labour under a state-sponsored labour transfer scheme that is tainting the global supply chain.

Xinjiang: more than half a million forced to pick cotton, report suggests

More than half a million people from ethnic minority groups in Xinjiang have been coerced into picking cotton, on a scale far greater than previously thought, new research has suggested.

The Xinjiang region produces more than 20% of the world’s cotton and 84% of China’s, but according to a new report released on Tuesday by the Center for Global Policy there is significant evidence that it is “tainted” by human rights abuses, including suspected forced labour of Uighur and other Turkic Muslim minority people.

The revelations came as the international criminal court (ICC) said it did not have the jurisdiction to investigate allegations of crimes against humanity and genocide in Xinjiang.

This year the US imposed sanctions and cotton import restrictions on suppliers controlled by the Xinjiang Production and Construction Corps (XPCC) – a paramilitary production entity which produces a third of Xinjiang’s cotton – over human rights concerns. But according to the report, those concerns extend beyond the XPCC to the whole region. It recommended the US government expand its import restrictions to cover all Xinjiang cotton, not just that produced by XPCC regions.

The report – written by Adrian Zenz, an independent researcher specialising in Xinjiang and Tibet – analysed government documents and state media reports to determine it was likely authorities were using the allegedly coercive “labour transfer programs” to provide hundreds of thousands of workers to pick cotton.

China has big plans, and big plans for hemp. “Industrial hemp and related industries have a broad space for development,” Zhao Yusen, a member of Chinese People’s Political Consultative Conference’s national committee, said during government meetings earlier this year. “Within the existing framework and funding channels, specific policy support will be given to planting, cultivation of high-quality varieties, development of agricultural machinery and equipment, development of high-end products, and tackling critical technical problems,” Zhao said.

Back in 2016, China’s 13th Five-Year Plan set out a great vision to grow hemp on 1.3 million hectares (3.2 million acres) for the production of 2 million tons of textile fibers by 2030, as the country shifts away from cotton production.

In the meantime, China has been a fast mover in extracts, specifically CBD, having quickly developed infrastructure and exports from a specialized cluster in the southern province of Yunnan, where the local government is giving strong support to the sector’s development. 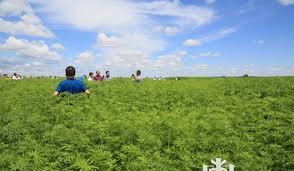