BEIJING, May 11 (Xinhua) — China has included all synthetic cannabis-related substances in the country’s controlled drug list, the first country to control the whole class of relevant substances, the Chinese anti-drug authority said Tuesday.

Another 18 kinds of psychoactive substances including fluoroketamine were also newly added to the control list, the office of the China National Narcotic Control Commission said at a press conference.

There are 297 known kinds of synthetic cannabis-related substances worldwide, among which 103 kinds were found to have appeared in China, according to the office. Enditem

China will become the world’s first country to regulate all synthetic cannabinoid substances, in a bid to get ahead of new variations whose chemical properties are not yet subject to regulation, the country’s drugs control office said on Tuesday.

By the end of 2020, 1047 variations had appeared worldwide, Deng said. Some of the drugs in China were being produced domestically, though some were also being smuggled from abroad, he added.

Abuse of the drug has been particularly prevalent in China’s western Xinjiang region, where police have seized 16 kilos of the drug and arrested 390 suspects since 2018, Yu Haibin, another official, said.

Substances were often disguised to look like liquid used in e-cigarettes, Yu said.

In April 2019 China added fetanyl-related substances to a list of controlled narcotics drugs, after criticism from former U.S. President Donald Trump for allowing the synthetic opioid to be shipped to the United States.

The number of drug users in China has dropped in recent years from around four million to one million, another official said, without specifying the time frame for the drop. 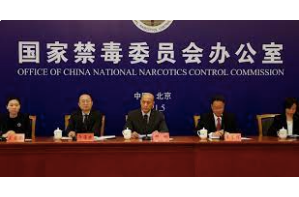