With the recent vaping revelations we’d suggest that whatever it says in the Farm Bill both technology behemoths will now take an even stronger line on controlling unfettered advertising of this sort on their platforms. Their lawyers are going to err ever more on the side of caution especially if more deaths are discovered to have been as a result of any links , however vicarious, to hemp or CBD products.

Civilised write by way of introduction..

Over the past few months, social media and search engine behemoths Facebook and Google have gone to great lengths to ban and censor CBD and hemp-related advertisements on their platforms — despite that the 2018 Farm Bill legalized the cultivation of hemp-derived CBD.

Facebook recently confirmed the ban, disabled advertising and “boost-post” privileges for mainstream brands like Dr. Bronner’s hemp-based soap company, and yet, has still not announced clear rules or reasoning for this decision.

According to a spokesperson for Dr. Bronner’s, Facebook disabled their advertising account (which is different from their actual Facebook page, which remains in tact) in early June for promoting hemp too often. The company does not know when it will be enabled again.  So even though hemp farming is now fully legal in the United States, hemp is still treated as an illegal drug under Facebook’s ad policy. 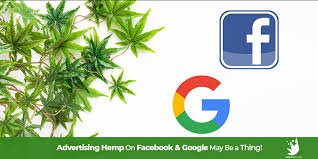