Westword has the story

The Colorado Marijuana Enforcement Division doesn’t want Delta-8 THC to gain a foothold in dispensaries, and on May 14 notified marijuana business owners that modified or synthetic versions of THC derived from industrial hemp aren’t allowed in this state’s stores.

Tetrahydrocannabinol (THC) comes in several different isomers: molecular compounds with the same number of atoms of certain elements but distinct arrangements of those atoms. The isomer that marijuana plants naturally produce in large amounts is Delta-9 THC, which is banned by the federal government. However, chemists have discovered other forms of THC that are chemically different yet carry similar intoxicating effects, like Delta-8 and Delta-10 THC.

Delta-8 and Delta-10 THC aren’t explicitly outlawed by the Controlled Substances Act, and can be produced with industrial hemp, a plant now legally grown at the federal level. This is done by extracting cannabidiol from industrial hemp and then converting the CBD into the “new” forms of THC with acetic acid. Although these products still flag drug tests, the legal loophole enabled a new, growing gray market online and at certain independent retail outlets, such as smoke shops and gas stations, which aren’t regulated by the MED. 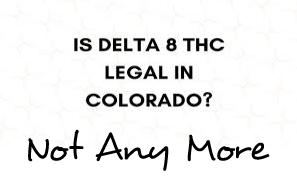