The Cookies chain, which operates dispensaries in Mission Valley and La Mesa, received final approval last week for a third dispensary in Sorrento Valley despite strong objections from community leaders.

The San Diego Planning Commission approved the Cookies dispensary in Sorrento Valley by a 5-1 vote.

Several commissioners who voted in favor criticized the name as disingenuous and misleading, but they stressed that their decisions must be based on zoning compatibility — not subjective opinions about the name of a business.

“I hate the name,” said Commissioner James Whalen, who voted to approve the new dispensary. “I think it’s disingenuous to say it’s not attractive to young people.”

Commissioner Kelly Moden said it was particularly troubling that young people will frequently travel past the new dispensary, because it is near several youth-oriented facilities.

“If they want to expand their business and go into other locations, they are probably going to continue to get this feedback from communities that have a lot of families,” said Moden, who also voted for approval.

Moden called the Cookies name “brilliant” from a marketing perspective, but she criticized it harshly from a community perspective. 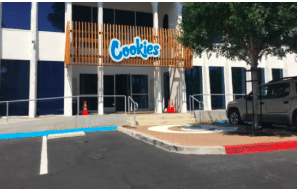