Those of you beginning to pick up regulated cannabis clients might find this article a useful and interesting read.

As of October 21, 33 states and the District of Columbia have allowed the use of medical marijuana. In addition, recreational marijuana is legalized in 10 states and the District of Columbia (see Exhibit 1 for details). Despite legalization in the majority of states, however, federal law (i.e., the Controlled Substances Act of 1970) does not allow any trade or business in trafficking either medical or recreational marijuana. Furthermore, Internal Revenue Code (IRC) section 280E disallows any deduction related to marijuana trafficking for federal income tax purposes. This conflict between federal and state law has raised concerns among CPAs providing services to the marijuana industry.

Since 2009, the Department of Justice has announced that it may not focus enforcement efforts on seriously ill individuals or their caregivers in states where marijuana cultivation and distribution for medical use is legalized; this guideline, however, was rescinded in 2018. Nevertheless, during his confirmation hearing in January 2019, Attorney General William P. Barr stated, “I am not going to go after companies that have relied on the Cole memorandum,” referring to the 2013 Obama administration policy of not enforcing marijuana prohibition in states where legalization has been established. “To the extent that people are complying with the state laws in distribution and production and so forth,” he said, “we are not going to go after that” (Glenn Fleishman, “States Hold Breath as Trump’s Attorney General Nominee Says He Won’t Prosecute Pot in Marijuana-Legal States,” Fortune, Jan. 15, 2019, http://bit.ly/2OUPbQR). Barr also noted that Congress needs to make a decision as to whether federal law should be changed or followed.

Several bills have been introduced in Congress to resolve the federal/state law conflict. H.R. 420 and S. 420 (the Regulate Marijuana Like Alcohol Act) aim to remove marijuana in any form from the schedules of controlled substances under section 202(c) of the Controlled Substances Act. In addition, H.R. 1120 (the Marijuana Revenue and Regulation Act) proposes to impose on any marijuana product an excise tax at a rate between 10% and 25% of the sales price. In April 2019, Senators Elizabeth Warren (D-Mass.) and Cory Gardner (R-Colo.) reintroduced the bipartisan Strengthening the Tenth Amendment Through Entrusting States (States) Act. (Max Savage Levenson, “The States Act Is Back. Can It Win Over Congress?” Leafly.com, Apr. 5, 2019, http://bit.ly/31mDtRL). The States Act intends to ensure that each state has the right to determine its best approach to marijuana within its border. H.R. 1595 [the Secure And Fair Enforcement (SAFE) Banking Act of 2019] was introduced to increase public safety by expanding financial services to marijuana-related legitimate businesses and service providers and reducing the amount of cash at such businesses.

None of these bills has been passed by Congress so far. The conflict between federal and state law will continue until Congress settles this issue. CPAs, however, should be aware of the potential consequences related to providing services to the marijuana industry during this period. This article focuses on analyzing the guidance on this topic from the state boards of accountancy and Tax Court cases.

State boards of accountancy are authorized to promulgate the rules of professional conduct in order to establish and maintain high standards of competence and integrity in public accounting practices. Normally, CPAs shall be persons of “good moral character” and shall not commit any “discreditable act.” Since the use of marijuana is still illegal in some states and at the federal level, the question of whether providing services to the marijuana industry displays a lack of good moral character or is a discreditable act remains unclear. As of January 2019, only 14 state boards of accountancy have issued guidance or documents on this matter. Exhibit 2 contains a summary of these state boards’ positions. 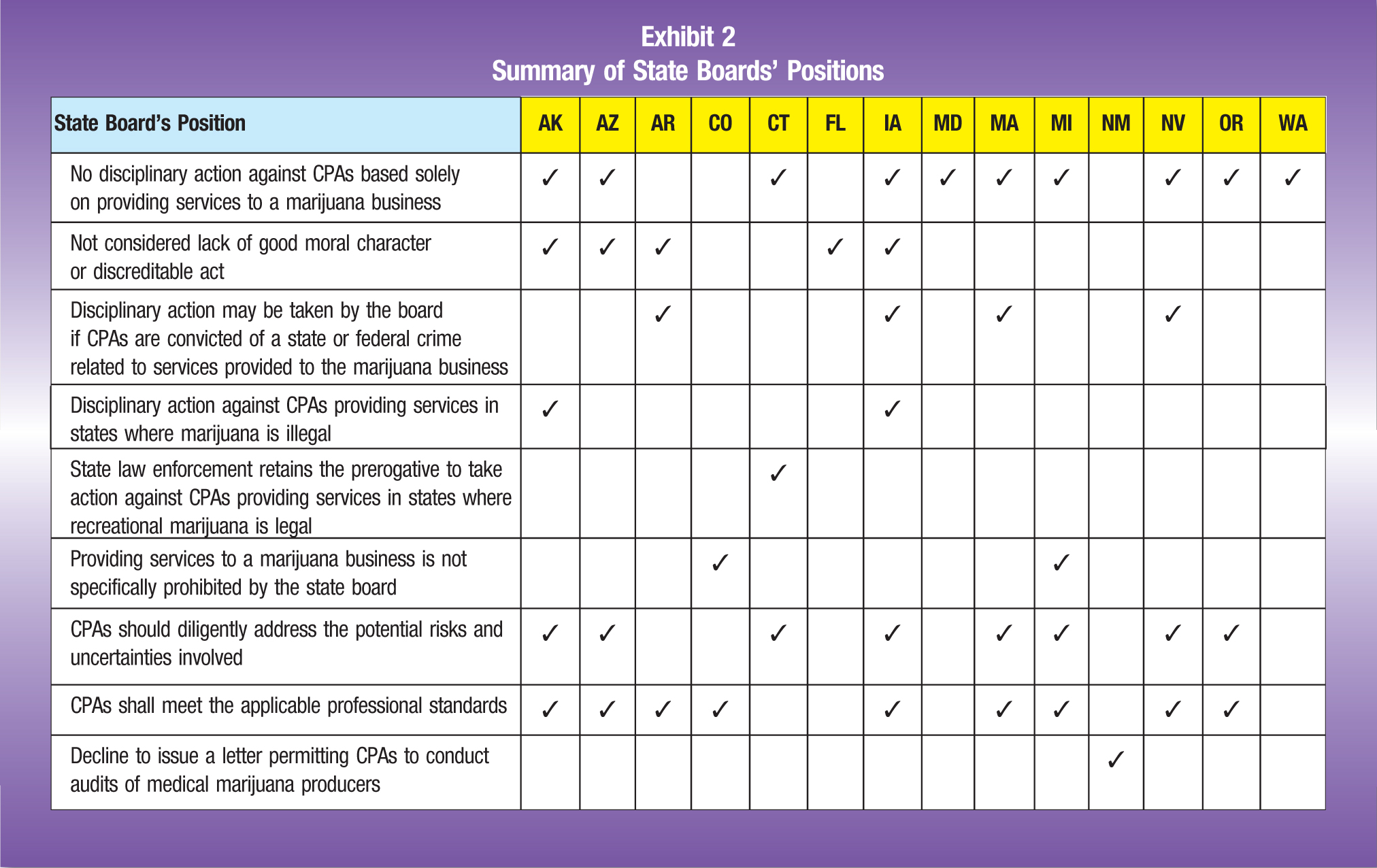 The question of whether providing services to the marijuana industry displays a lack of good moral character or is a discreditable act remains unclear.

Four state boards (Arkansas, Iowa, Massachusetts, and Nevada) explicitly state that the guidance will not negate the possibility that disciplinary action may be taken by the board if a CPA is convicted of a state or federal crime related to providing services to a marijuana business. This could create a risky situation where a CPA legally provides services to a marijuana business at the state level but is convicted of a federal crime. Under this scenario, the CPA should report the conviction to the state board and could be subject to disciplinary action.

New Mexico Administrative Code section 7.34.4.23(B)(2) stipulates that a licensed nonprofit medical marijuana producer shall submit to the governing agency an annual audit, which shall be conducted by an independent CPA. The New Mexico Public Accountancy Board declined, however, to issue a letter permitting CPAs in New Mexico to conduct the audits of medical marijuana producers. Consequently, no New Mexico CPAs agreed to perform such audits (Len Goodman, Presentation for Legislative Health & Human Services Committee Taos Meeting, July 17, 2014, http://bit.ly/2Bi3gQf). To date, this audit requirement is still in effect.

Maryland provides an opposite example to New Mexico’s position. Code of Maryland Regulation sections 10.62.08.01, 10.62.19.01, and 10.62.25.01 require grower, processor, and dispensary applicants to attach audited financial statements along with their application for license. As the Maryland Board of Public Accountancy allows CPAs to provide services to the marijuana businesses located in within the state, the in-state authority conflict in New Mexico does not exist in Maryland.

Three state boards (Colorado, Iowa, and Michigan) explicitly note that the board’s position statement should not be used for other purposes. The Colorado Board of Accountancy, for example, indicates that its position statement cannot be construed as an endorsement for CPAs to provide professional services to the marijuana industry, as a statement about the feasibility of meeting applicable professional standards in providing services to the marijuana industry, or as a statement about marijuana enforcement in any other jurisdiction or by any other local, state, or federal authority.

Laws are subject to change.

No disciplinary action to date.

As of January 2019, the AICPA is not aware of any state board of accountancy acting against a CPA who provides services to the marijuana businesses. In addition, the AICPA Professional Ethics Team has not received any referral from state boards of accountancy for such action. Nevertheless, CPAs should not overlook the potential risks and uncertainties related to providing services to the marijuana industry.

Taxpayers are generally allowed to deduct the ordinary and necessary expenses incurred in carrying on a trade or business under IRC section 162(a). As noted above, however, IRC section 280E disallows the deduction of any amount paid or incurred during the taxable year in conducting any trade or business if such trade or business consists of trafficking in controlled substances. Because marijuana is a controlled substance, taxpayers in the marijuana industry cannot deduct their business expenses under section 280E. Taxpayers in the marijuana industry are, however, able to deduct cost of goods sold (Franklin v. Comm’r, T.C. Memo. 1993-184; Vasta v. Comm’r, T.C. Memo. 1989-531).

Although cost of goods sold is deductible for taxpayers in the marijuana industry, taxpayers must keep sufficient records to substantiate any amount claimed (Jabari v. Comm’r, T.C. Memo. 2017-238). In Beck v. Comm’r (T.C. Memo. 2015-149), the taxpayer’s marijuana dispensary was raided by the Drug Enforcement Administration (DEA), and some marijuana was seized. The taxpayer carried more than 70 different strains of marijuana but failed to identify which strains were confiscated by the DEA. In addition, the taxpayer did not provide any evidence regarding the amounts he paid for the strains of marijuana or how he determined his selling prices for the various strains. Consequently, the Tax Court ruled that the taxpayer was not allowed to claim the cost of goods sold for the marijuana confiscated by the DEA.

Because marijuana is a controlled substance, taxpayers in the marijuana industry cannot deduct their business expenses under section 280E.

The taxpayers in Feinberg v. Comm’r (T.C. Memo. 2017-211) did not present any contemporaneous business records but relied exclusively on an expert report prepared by a CPA. The report, however, was brief and its content was unreliable; multiple statements referred to no underlying source of information. The Tax Court noted that the report was not based on personal knowledge of the taxpayers’ business; instead, it attempted to present reconstructed income tax returns as evidence of the taxpayers’ correct tax liabilities. The court concluded that a reconstructed income tax return based on industry averages does not substantiate the cost of goods sold.

In Ibidunni v. Comm’r (T.C. Memo. 2016-218), the taxpayer purchased a substantial part of his inventory in cash but failed to provide any documentation to substantiate his cash purchases during the IRS’s audit. At trial, the taxpayer submitted a handwritten summary listing amounts of marijuana purchased to support his claim. The Tax Court found that the list was not persuasive because purchase dates and prices were missing.

Taxpayers may be involved in more than one trade or business (Hoye v. Comm’r, T.C. Memo. 1990-57). Whether an activity is a trade or business separate from another depends on the degree of economic interrelationship between the two undertakings and other factors (Collins v. Comm’r, 34 T.C. 592). The IRS generally accepts a taxpayer’s characterization of two or more undertakings as separate activities unless the characterization is artificial or unreasonable [Treasury Regulations section 1.183-1(d)(1)].

The taxpayer in Californians Helping to Alleviate Medical Problems (CHAMP) v. Comm’r (128 T.C. 173) provided its members with caregiving services as well as medical marijuana. The IRS contended that the taxpayer’s primary activity was providing marijuana and the caregiving services were merely incidental to the marijuana dispensing activities. Nevertheless, the Tax Court found that the taxpayer provided many nonmarijuana services, such as discussion groups, regular distribution of food and hygiene supplies, personal counselors’ services, social events and field trips, educational classes, and other social services. Consequently, the Tax Court concluded that the taxpayer operated two separate businesses, and thus the expenses were allocated between the two trades or businesses on the basis of the number of employees and the portion of the facilities devoted to each business.

Currently, only a few state boards of accountancy have issued their positions regarding providing services to the marijuana industry. CPAs interested in providing services to the marijuana businesses should be aware of the applicable laws, regulations, and rules in these jurisdictions, including the states where their accounting firms are based and their clients are located. In addition, IRC section 280E plays an important role when a marijuana business claims for deduction, and the Tax Court has repeatedly confirmed that business expenses of a marijuana dispensary are not deductible. CPAs should pay attention to the related authorities in this area. Since the federal-state tax conflict will not be resolved until Congress removes marijuana from the controlled substance list or makes an exception in the tax law, CPAs should heed to any future legislation in this matter and be alert to the potential changes of tax consequences.