Cannabis cultivation workers at Cresco Labs in Massachusetts have successfully negotiated their first union contract. The agreement is the latest in a series of organizing actions by cannabis workers across the country, including recently secured workplace contracts in Illinois, Pennsylvania and California.

“We’re seeing a big momentum in cannabis workers locally and across the country,” Sam Marvin, organizing director at United Food and Commercial Workers (UFCW) Local 328, which helped Cresco Labs workers organize, told Filter. “Workers across the industry are coming together and securing an equitable future in a growing industry.”

Among the Cresco Labs union’s newly won protections are scheduling policies, employee discounts and a $1.50 hourly pay increase, with annual raises over the three-year contract.

“I am so proud of our hardworking team at Cresco for sticking together and securing this victory,” said union representative Molly Balbuena in a statement. “We are so excited to have secured the better future and collective voice we were looking for when we formed our union with UFCW.”

Fall River, MA– Join us in congratulating the hardworking cultivation workers at Cresco/Sunnyside in Fall River, Massachusetts, who voted to approve their first union contract! The agreement secures guaranteed wage increases, fair policies around scheduling, offers important workplace protections and protects important retirement benefits and employee discounts. With this new agreement, Cresco cultivation workers will see up to an 18.7% increase in wages over the next three years. This comes as the Massachusetts cannabis industry generated $81.7 million in 2020 tax revenue[1]  and is expected to continue to grow this year.

Molly Balbuena, a three year employee of Cresco in Fall River and a member of the negotiating team celebrated the win with her co-workers. After voting to approve their agreement she stated, “I am so proud of our hardworking team at Cresco for sticking together and securing this victory. We are so excited to have secured the better future and collective voice we were looking for when we formed our union with UFCW. We urge all cannabis workers to come together and say Union Yes!”

When Cresco cultivation employees began organizing with UFCW Local 328, the workers wanted to address issues relating to low pay and the lack of workplace protections. Workers emphasized that they liked their jobs but wanted to have a real voice at work and a collective voice within the growing industry.

In November 2020, the Cresco cultivation workers completed the process of joining UFCW Local 328 after the Massachusetts Department of Labor Relations certified their petition, giving them the legal right to negotiate a union contract.

Cresco Labs is one of the largest multistate cannabis operators in the country and operates a cultivation and processing facility as well as Sunnyside Dispensary in Fall River.  The Cresco workers are just the latest group of workers to join the UFCW in Massachusetts.

UFCW Local 328 represents over 11,000 workers in a range of industries across Rhode Island and Southeastern Massachusetts. As the recreational and medical cannabis industries have become mainstream across the United States, the UFCW has represented workers in cultivation and retail operations nationwide and has fought to ensure that working families have a seat at the table to secure important workplace protections and share in the gains and success of the cannabis industry. The UFCW currently is the largest representative of cannabis workers with tens of thousands of members in the industry nationwide. 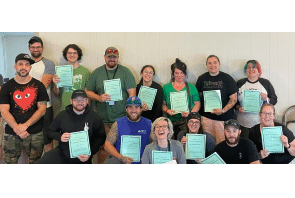