We presume that Adam Bierman is silently sobbing in the corner as this news rolls out.

This was meant to be his glory !

Curaleaf, like most things they do, are announcing it without too much hoopla which in the world of self celebratory cannabis types has to be something that’s celebrated.

The opening of Curaleaf Jacksonville San Jose, located at 9760 San Jose Blvd, follows the recent opening of Curaleaf St. Petersburg North, and is the second of four new dispensaries that Curaleaf plans to open in Florida this month, one of the country’s fastest-growing medical cannabis markets. By the end of February, Curaleaf’s planned footprint will include 37 dispensaries in Florida and 102 nationwide.

“Reaching 100 dispensaries nationwide is a remarkable milestone and Curaleaf is honored to be a trusted source for high quality cannabis products and education for patients in Florida and communities across the country,” said Joe Bayern, CEO of Curaleaf. “As the Florida medical program continues to grow, Curaleaf’s expansion in the state will create jobs and better serve patients by providing more convenience and access to the critical services and products they need.”

As part of the company’s strategic expansion, Curaleaf plans to increase its cultivation capacity to support the increased demand statewide for its cannabis brands and products. This continued growth aims to add over 40 new jobs to the state, creating valuable economic opportunities in surrounding communities.

In addition to its two new locations in Jacksonville and St. Petersburg, Curaleaf Bradenton (2605 Cortez Rd West), located on the west side of the state, will be the first to open in Manatee County, and is planned to open tomorrow, February 11th. The largest of the new dispensaries, measuring at a sprawling 4,699 square feet, Curaleaf West Palm Beach (6835 Okeechobee Blvd) plans to open this Friday, February 12th. This suite of new dispensaries in St. Petersburg, Jacksonville, Bradenton and West Palm Beach will offer the same best-in-class patient care, convenient curbside pick-up, and expanded access to Curaleaf’s high-quality medical cannabis products, including Select, America’s #1 cannabis oil brand. Select Elite Live, a high quality, high potency oil with a wide variety of strain-specific flavor and effects, quickly became a record-breaking best-selling product in the state reaching $1 million in sales in its first month in the market. 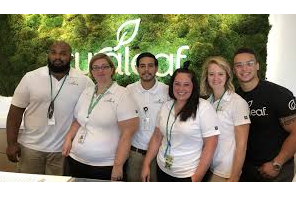