DEA Report Shows Cannabis Arrests And Seizures Up In 2020

Data recently released by the U.S. Drug Enforcement Agency shows that federal law enforcement agents and their state and local partners seized more than 4.5 million marijuana plants in 2020, a figure that is up nearly 20% over 2019. The annual DEA report also shows that federal law enforcement officers made nearly 5,000 cannabis-related arrests in 2020, a year wracked by the social and economic fallout of the Covid-19 pandemic.

According to the data published in the DEA’s yearly Domestic Cannabis Eradication/Suppression Program Statistical Report, approximately 4.54 million cannabis plants were seized and eradicated in 2020, up from about 4 million plants in 2019. The totals include more than 3.7 million cannabis plants seized from 4,151 outdoor grow sites and more than 830,000 plants confiscated from 1,286 indoor cultivation operations.

“In 2020, the DEA continued its nationwide cannabis eradication efforts, providing resources to support the 127 state and local law enforcement agencies that actively participate in the program,” the agency wrote on its website. “This assistance allows the enhancement of already aggressive eradication enforcement activities throughout the nation.”

California saw the largest percentage of both arrests and confiscated cannabis plants in the country, a trend that continues from previous years. In 2020, approximately 82% of the seized cannabis plants and 40% of the marijuana-related arrests nationwide occurred in California. Nationwide, agents seized more than $41 million in assets related to the DEA’s marijuana eradication efforts in 2020.

Paul Armentano, the deputy director of the National Organization for the Reform of Marijuana Laws (NORML), said in a press release that federal prosecution of cannabis-related offenses continues despite strong support for marijuana legalization.

“While marijuana enforcement is arguably not the same priority that it once was for the DEA – likely because of changes in state policies and in federal budgetary guidelines – this does not mean that the agency is content to look the other way at violations of federal marijuana law,” Armentano said. “There are still several thousands of Americans arrested for federal marijuana violations each year – even at a time when some seven in ten Americans believe that the plant ought to be legal for adults to use and possess.”

The data on marijuana arrests and seizures are compiled annually as part of the DEA’s Domestic Cannabis Eradication/Suppression Program (DCE/SP), the only nationwide law enforcement program that exclusively targets drug trafficking organizations involved in cannabis cultivation. The DCE/SP began funding marijuana eradication programs in Hawaii and California in 1979 and was quickly expanded to include programs in 25 states by 1982. By 1985, all 50 states were participating in the DEA program.

Last year, a DEA report noted that it had “continued its nationwide cannabis eradication efforts, providing resources to support the 130 state and local law enforcement agencies that actively participate in the program. This assistance allows the enhancement of already aggressive eradication enforcement activities throughout the nation.”

The figures for marijuana-related arrests and plants seized in recent years are both down significantly compared to a decade ago. In 2011, federal agents and their partners confiscated 8.7 million plants and made more than 8,500 arrests. Armentano said last year that the drop over the last 10 years can be attributed to cannabis policy reform.

“Following the enactment of statewide adult-use cannabis legalization laws, both DEA-related marijuana arrests and seizures have fallen dramatically,” said Armentano. “That said, these totals affirm that targeting unregulated marijuana-related growing operations still remains a DEA priority, even at a time when most Americans have made it clear that they want cannabis policies to head in a very different direction.” 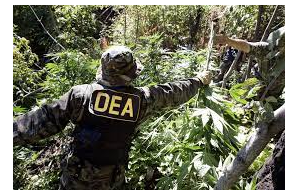