The Escondido City Council is set to revisit a discussion on legalizing cannabis sales at its May 19 meeting, one week after the deadline for up to $75,000 in Cannabis Equity Act Grant funding.

The resolution to potentially legalize cannabis sales in the city of Escondido was on the council agenda on March 24, as well as a resolution to accept up to $75,000 in grant funding. The council, however, voted 3-2 to postpone the discussion to a later date.

The grant would allow the city to “develop a cannabis equity assessment, with the aim of crafting regulations to encourage permit applications from individuals and businesses disadvantaged by previous drug enforcement activities. … The City would aim to create a program that would develop these businesses and allow them to flourish legally,” said the staff report.

The deadline for accepting the grant is May 12.

At the March meeting, Councilwoman Consuelo Martinez and Mayor Paul McNamara encouraged their fellow council members to revisit the issue before the grant deadline.

However, City Manager Jeffrey Epp told The Coast News that the scheduling was largely based on council timing and available dates.

He added that grants like this come and go and there will likely be other opportunities for the council to consider similar grants.

Emotions ran high at the March meeting when the council only briefly touched on the cannabis issue. The more in-depth discussion on May 19 is expected to be a contentious one.

The Escondido council currently has a conservative majority with Republicans Morasco, Inscoe and Garcia holding the majority of seats.

Despite the council officially being a nonpartisan office, members’ political leanings and philosophies tend to play a part in the council’s agendas and voting patterns.

In 2018, the council unanimously voted to prohibit the sale and cultivation of cannabis in the city. That was a different council than the one that is seated now.

“When the State of California legalized recreational cannabis, Escondido was one of several cities to specifically prohibit the production and sale of cannabis products within their jurisdictions,” the staff report said. “In Escondido, 52% of local voters supported the Proposition 64 statewide measure in 2016; the City’s Resident Satisfaction Survey, conducted in June 2020, showed general support of commercial cannabis sales. “

During the last discussion, city staff brought up the concern that several organizations have already indicated that they would put the issue on the ballot if the council doesn’t address it soon.

“Cannabis regulations adopted by voter initiative leave a city with little control over the form of regulation, and yet the city still bears responsibility for administering the same regulations. Moreover, regulations left to adoption by initiative offer no guarantee of a funding mechanism to cover the costs of administration,” according to the staff report. 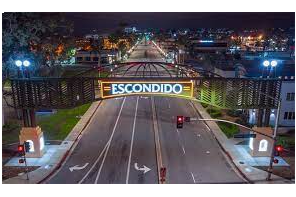