“This budget isn’t my budget, it’s your budget,” the governor said during the event. “Our justice system has put a strain on our state, and on our communities, and on our families for far too long.”

Over 200 people were listening to the address through a Zoom chat, though many more likely saw it on YouTube. While some attendees were from organizations like MICAH, a multi-ethnic interfaith organization, others were simply concerned residents. Once given an opportunity to share comments, many brought up cannabis legalization.

Bringing either statistics or personal stories to the table, they questioned the point of the continued prohibition. Others touched on the issue of not only incarcerated youth, but young people remaining under-served in communities because of a lack of mental health treatment. Francis Zabrowski, a volunteer chaplain at the Milwaukee Secure Detention Facility (MSDF), said “I’ve heard so many stories, both men and women who are stuck in these jails, and yet have tremendous potential. So, I would like to take the point of view of how to best use taxpayers’ money. And, as many said already, invest in humanity.”

During the address Evers admitted, “we’ve got a lot to change.” The Badger Bounceback plan outlines several policy shifts which Evers said he hopes will begin to remedy some of that strain. Those changes include expanding the Department of Corrections’ earned release program, community alternatives to incarceration and revocation and legalizing cannabis.

“In addition to working to correct the disproportionate impact of marijuana enforcement on communities of color within the justice system, we’re also proposing using about $80 million in new tax revenue generated by legalization to be reinvested in communities through the community reinvestment fund,” Evers said.

When the budget was announced, the governor noted that legal recreational cannabis could become a $165 million industry for the state.

While Wisconsin’s GOP legislative leaders have already signaled that they won’t budge on cannabis prohibition including confirmation Thursday by Majority Leader Devin LeMahieu that there are not enough votes in the state Senate, cannabis reform has become more of a bipartisan issue, with Republican state representatives introducing their own proposals to legalize medical cannabis or lower existing fines. Local municipalities from Appleton to Milwaukee have successfully passed ordinances to lower fines for cannabis possession. And in Madison, cannabis is essentially decriminalized.

“It just makes sense for us to take this step,” said Lt. Gov. Mandela Barnes, who also participated in Wednesday’s event. “There’s no reason that we shouldn’t join the other 17 states that have legalized recreational marijuana. And not only are we continuing to lock people up for something that many people in other states not only do freely, but for the same business arrangement that have made people millionaires virtually overnight across this country. It is a waste of money, it is a waste of time and it is completely unjust.”

Beyond simply legalizing, the Bounceback plan also aims to aid people who’ve had past cannabis-related convictions. Barnes noted that Evers has issued more than 150 pardons and the Department of Corrections has expanded the earned release program.

Evers said he also wants to modify criminal penalties so that people previously convicted of — or still serving time for — marijuana-related crimes can have their sentences repealed or reduced to non-violent minor offenses. 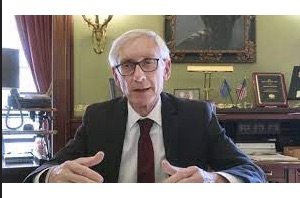