The six marijuana shops that opened Friday across the state reported $94,643 in sales, according to the Office of Marijuana Policy.

A half-dozen pot shops reported $94,643.38 in first-day sales on Friday under Maine’s new adult-use marijuana program, resulting in $9,464.34 in sales tax for the state.

The preliminary data were reported Saturday afternoon by David Heidrich, director of engagement and community outreach for the Office of Marijuana Policy. Nine retail stores are now licensed to sell recreational cannabis in Maine, but only six opened Friday because of a shortage of legally tagged, tested and taxed adult-use cannabis.

Maine began its first day of sales with eight active licenses, Heidrich said, and issued a ninth during the day to Hi-Lo Dispensary LLC in Poland. “The licensee has indicated … they will not open for at least a few weeks,” according to a press release from the Office of Marijuana Policy.

The sales data will be updated Tuesday.

The stores that opened Friday are SeaWeed Co. and Theory Wellness in South Portland, Firestorm Cultivation in Bangor, Green Cures in Auburn, Northland Botanicals in Stratton and Sweet Relief Shop in Northport. Two other stores with licenses didn’t open Friday: House of Ganja in Newry and Coastal Cannabis Co. in Damariscotta.

Limited supply drove up prices and forced retailers to enact purchase limits. An eighth of an ounce of smokable bud cost between $55 and $65, but prices are expected to fall as more stores open and more adult-use growers get their licenses. 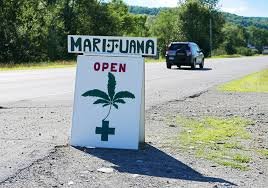