A group gathered outside Sweet Puff Smoke Shoppe Saturday to protest the arrest of the store owner. Reports 3WEAR-TV

According to jail records, Nedal Abdel Mohammad was arrested in September 2019, charged with trafficking marijuana.

But store manager Honney Peterson says the merchandise in question was actually legal.

“We had a shipment of CBD come in,” Peterson said. “When the package was at Fed-Ex, law enforcement was called to check out the box. They claimed it was marijuana even though we had all the proper paperwork with the proper testing levels on THC in it.” Peterson says the CBD had less than 0.3% THC in it, which is legal for sale in the state of Florida.

“They’re trying to give him 15 years to life over CBD,” Peterson said. “This is something that’s been sold before we even had this store open.”

Mohammad’s case is still ongoing and protesters are working to get the charges dropped.

“He’s an innocent man,” Peterson said. “He’s a good man. He’s done a lot for this community and helps a lot of people.”

Many people at the protest shared stories of how Mohammad has helped them. One employee says he helped pay her electrical bill. Another says he helped her pay for a surgery she needed to have.

“We want people to be aware of what’s happening to an innocent man,” Peterson said. “We need to clean this up because our community deserves better than this.”

We did reach out to the State Attorney’s office and the Florida Department of Law Enforcement for details on Mohammad’s charges. Both agencies say they’ll be able to provide more information on Monday. 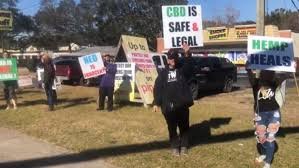