In most countries around the world the idea of a bunch of people running around stoned off their gourds with guns is a truely terrifying concept.

Here at CLR we love the American experiment of democracy in motion although at the moment it does remind us somewhat of the magnesium chemistry lessons we used to do at school….

Gun, marijuana stocks rise on prospects of a Democratic sweep in 2020 election

Guns and drugs are two items that have been flying off shelves since the start of the coronavirus pandemic, and their publicly traded companies have benefited handsomely.

Driven by a combination of social unrest fears and the prospects of a Democratic sweep that might lead to stricter gun laws and legalization of marijuana coast to coast, both gunmakers and cannabis companies have seen their stock prices trade higher.

Fears of unrest:Americans worried about Election Day violence and chaos are buying guns and toilet paper

Marijuana stocks have not seen as strong a lift. But shares of the 10 largest Canadian and U.S. companies have increased 20% since August, according to Veridian Capital Advisors, a mergers and acquisition firm focused on the budding marijuana industry.

Pot stocks have been boosted in part by rapidly rising sales, which are expected to climb an additional 40% in 2020 to more than $15 billion, according to Marijuana Business Factbook. If Biden and Harris are elected with a blue Senate, sales could further accelerate, especially given Harris’ comments during the vice presidential debate that she’s in favor of decriminalizing the drug.

The factors behind the rise in gun stocks are more complicated.

Some buyers worry that Biden will make good on threats made by presidential contender Beto O’Rourke during the primaries that Democrats will be coming for assault-styled weapons, and have been rushing to make additional purchases.

Others are entering the market for the first time based on fears that civil society is breaking down and a growing sense of lawlessness fanned by scenes of violence in American cities broadcasted into living rooms.

Together these trends have caused a spike in gun and ammunition sales at the biggest publicly traded gun companies,

At Smith & Wesson, sales rose 141% to $230 million during the three months ending July 31 compared with the same period a year earlier.

At Sturm, Ruger firearms, sales increased 36% to $129.4 million during the three months ended June 30 compared with the same period in 2019, while at Vista Outdoor, sporting gun sales were up 8% to $334 million.

Combined with enhanced profitability, rising sales not only buoyed stock prices, they contributed to shortages of guns and ammunition across the country.

“Sales this year started off like any other year,” said Garrett Porter, a gun manufacturer in Apopka, Florida. “We anticipated a build-up toward election. But with COVID, a panic was created that unfurled into the civil unrest that followed.”

“There became this heightened sense of concern for American citizens and a fear of the unknown,” he continued. “A lot of people wanted to arm themselves. Sales have been extremely high – as much as 10 times higher than normal.”

“Nobody’s been able to handle the volume – even the biggest manufacturers,” Porter said. “Demand has outweighed supply by far and pushed orders back into next year.”

The same goes for ammo, according to Jake Felde, chief executive of Lucky Gunner, one of the biggest ammunition wholesalers in the nation.

“Traffic to our site is about double what we would consider ‘normal,’” he said. “We’re doing all we can to keep the most popular calibers in stock right now.”

“When you go to the store and you don’t see toilet paper on the shelves, it tends to make people stock up on all sorts of items that they may need in a pinch, whether that’s canned corn, water, or items to keep your family safe,” Felde said. 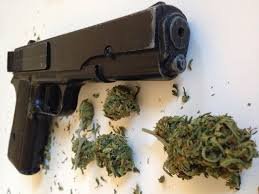