It was never going top be anything but!

Congressional lawmakers have backed off from Democrats’ plan to include cannabis banking reforms in the National Defense Authorization Act (NDAA), Marijuana Moment reports.

The last-minute push to add the SAFE Plus package to the annual defense bill had drawn ire from the body’s Republican members. Sen. Kevin Cramer (R-ND), who co-sponsored the SAFE Banking Act in the Senate, said he felt that attaching the reforms to the NDAA “dilutes the proper role of this place.”

“House and Senate Democrats are still obstructing efforts to close out the NDAA by trying to jam in unrelated items with no relationship whatsoever to defense. We’re talking about a grab bag of miscellaneous pet priorities — making our financial system more sympathetic to illegal drugs or the phony, partisan permitting reform and name-only language that’s already failed to pass the Senate earlier this year.” — McConnell, via Marijuana Moment

But Senate Majority Leader Chuck Schumer (D-NY) called the banking reforms a priority and suggested there could be another path forward. “This is something, again, that’s had bipartisan support. We’ve been working with Republicans. It’s a priority for me,” he said. “I’d like to get it done. We’ll try to discuss the best way to get it done.”

Lawmakers could still look to advance the reforms during the current lame duck session by attaching the so-called SAFE Plus package — which contains key language from the SAFE Banking Act, expungement language from the Harnessing Opportunities by Pursuing Expungement (HOPE) Act, and protections for gun-owning cannabis consumers via the Gun Rights And Marijuana Act (GRAM) Act — to a separate bill. Lawmakers may even attempt to pass the reforms as standalone legislation before the GOP takes control of the House next year, the report said. 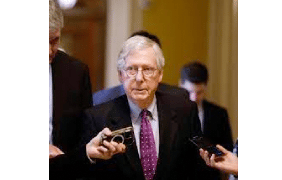