The BBC is reporting that  a  teenager from Greece who was found in charge of a £600,000 cannabis farm in a disused shop building in the Borders has been jailed for 15 months.

Emiliano Boia, 19 – who had only been in the UK for six months – was promised £15,000 to look after the Selkirk drug cultivation for three months.

He admitted a charge of being concerned in the supply of cannabis.

Selkirk Sheriff Court was told his involvement was as a “foot soldier in a large operation”.

The court heard how a police raid recovered 652 cannabis plants in the building – just yards away from a primary school – and Boia was arrested.

Sheriff Peter Paterson told him: “You engaged in this course of conduct for money.

“While it may be that you did not fully appreciate what was involved you could be under no illusion that you do not get £15,000 for three months’ work if there is not a high level of criminality involved.”

It was the second time in three years that police had raided the building on Selkirk’s Curror Street and found it being used as a cannabis farm.

When police searched the property on 15 January, Boia was the only person found on the premises.

Procurator fiscal Graham Fraser told the court he had no previous convictions and had been in custody since 16 January.

“The position is that the accused was part of an organised drug production and supply operation,” he said.

“While in no way do I want to minimise his position, it is quite possible he was at the lower echelons of that operation.”

Defence lawyer Greg McDonnel said his client had become deeply involved in the operation and when he realised, it was too late to get out.

“His part in the operation was at the lower end of the scale,” he said.

He told the court Boia had received no money for his role and planned to return to Greece at the end of his jail term.

The custodial sentence was back-dated to 16 January when he was first remanded in custody. 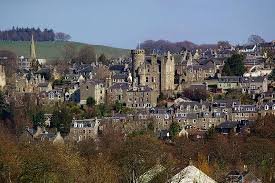