In a milestone moment, the employees at Greenleaf Compassionate Care Center in Portsmouth, Rhode Island became the first cannabis dispensary workers in the state to unionize after an overwhelming majority voted to join United Food and Commercial Workers Union Local 328 (UFCW) by a vote of 21 to 1.

The newly organized team at Greenleaf includes budtenders, keyholders, online team members and delivery associates. Each day, these workers strive to serve the needs of their patients by providing medicine and guidance through the state’s legal medical marijuana program.

In the weeks leading up to the election, Greenleaf management hired out of state anti-union consultants who held mandatory meetings and distributed flyers to employees in the dispensary. Despite their attempts, the workers at Greenleaf remained united and displayed incredible support and solidarity. The tactics by the company only reaffirmed the workers’ strong commitment for forming their union and securing a better and brighter future for all at Greenleaf.

Read the full story at.  https://www.marijuanatimes.org/greenleaf-workers-vote-to-unionize-in-historic-election-victory/ 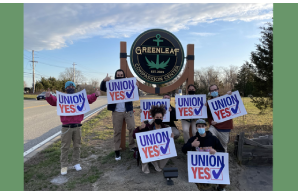