The Growth Op reports…our favourite story of the week

A worse-for-wear hiding spot for seized cannabis at the Sauteurs Police Station in Grenada proved too tempting for a group of people who decided to steal some of it.

Over a period of time, officers at the station noticed that some of the confiscated drugs were going missing. Taking remedial action, subsequent investigations “revealed that individuals fished out marijuana from the rear end of the building due to structural deficiencies,” according to the Royal Grenada Police Force.

According to The Jamaica Star, the cannabis was to be used as evidence in ongoing court matters. Police did not say how the suspects were identified, including if surveillance cameras from the station or nearby buildings were available.

This past weekend, nine civilians — including two juveniles — were charged in connection with the robbery. It’s not clear if thieving was the usual M.O. of some accused, with police reporting the occupations of some as a boat builder, fisherman and farmer.

Williams, Jeremiah and Fullerton were also ordered to “ordered to surrender all their travel documents and obtain permission from the court to leave the state,” according to the police.

If bail is not provided by the accused, that person will be remanded in prison until May 26. Once bail is secured, they are set to reappear in court on June 22.

In March, a member of the Grenada Marijuana Decriminalisation Committee confirmed proposed legislation that would decriminalize cannabis use was before the Cabinet of Ministers for discussion to see if a public consultation should be held, according to Caribbean National Weekly.

As it stands, however, recreational cannabis remains illegal in Grenada… as does stealing weed from police stations.

“The structural deficiency of the building has since been resolved,” notes the police report. But not before cannabis valued at EC$721,224 ($324,551) was removed from the storage facility at the police station. 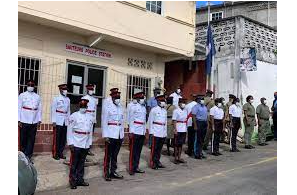