Guam: It Took A While But They Got There ! Cannabis commission issues first producer, retail licenses

Saipan Select LLC is the first applicant to be issued a retail license under the Commonwealth’s cannabis commercial program.

With the issuance of a retail license, local residents 21 and older can purchase marijuana legally over the counter.

The producer class III license is the largest of the commercial production licenses that the CNMI Cannabis Commission offers.

It permits the licensee a grow area of up to 5,000 square feet of canopy space for the legal planting, cultivation, growth, harvesting, drying and sale of cannabis to licensed wholesalers, processors, retailers, lounges, laboratories, and/or research certificate holders in the CNMI.

“This is a journey that we’re venturing together. It’s really about setting the right precedent, (or) how strict it is and how flexible (it is) as well. … It’s all about doing this ‘the right way,’” said Gov. Ralph DLG Torres.

Lt. Gov. Arnold I. Palacios, for his part, emphasized the need to take care of both the local community and the industry while Senate President Jude U. Hofschneider reiterated his support for the new industry.

Commission Chairwoman Nadine Deleon Guerrero expressed the commissioners’ appreciation to Saipan Select LLC for complying with all the requirements.

She likewise expressed the commission’s gratitude to the Torres-Palacios administration for its support over the last year.

“The fact that we’re here today speaks a lot about what kind of support they provided to the commission,” she added.

Commission managing director Monique B. Sablan said there had been lot of back-and-forth with Saipan Select LLC.

“Thank you so much for entering this industry. I know it’s the beginning and it’s kind of scary sometimes. There are a lot of investments that need to go in, but, … you’re going down in history as the very first large producer and the very first retail shop, so good luck.”

Sablan also noted that the application and licensing fees are regulatory fees that are meant to help the commission operate fully and functionally.

“Today, we have two licenses going to one LLC. (They) are about to help our economy. … I hope and I pray that this is a compliance opportunity for (them) to set the tone for other licensees to come. … We want (them) to be successful, but we also want to protect our community,” Sablan said.

Former Fire Chief Clyde K. Norita, Saipan Select LLC spokesman, said it is difficult to project how much cannabis the business will be producing and how much revenue it will generate in its first year.

Sales likely will begin in the next six to eight weeks, he said.

“Everything is ready. … The only thing that we are waiting for is the harvest of the plantation,” Norita said.

Saipan Select also is in the process of finalizing discounts on cannabis for cancer patients, veterans and the manamko’.

Saipan Select officially submitted its license application to the commission in December 2020, then met with the commission a month later. In April of this year, its facilities were inspected.

“We’re very positive and we’re aggressive,” Norita said. “It’s a new venture and we’re learning as we go. It’s good that we’re setting the path for future licensees, and at the same time, building the relationship and so forth.”

Norita said selling cannabis is similar to selling beer. “The market is there, especially as we start to look into reopening our tourism (industry),” he added.

Since its organizational meeting in September 2020, the goal of the cannabis commission has been to create a safe environment for local residents to have an option to consume cannabis legally, according to the commission.

More than 20 commercial applications from potential cannabis operators have been received and reviewed by the commission, seven of which have been issued Approval in Principle, or AIP, letters.

The applicants’ facilities will be inspected by the commission. 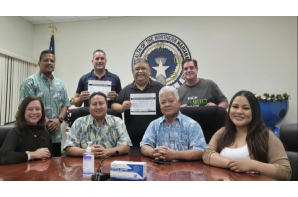