There are now 11 government-approved “responsible officials” for the island’s new recreational cannabis industry, but no one has taken the next step of applying for a cannabis establishment license, according to the Department of Revenue and Taxation.

The board also approved the responsible official application for Eugene Arriola, of The Heights Farm, which plans to cultivate cannabis in a facility with up to 2,500 square feet of canopy space.

A third pending responsible official application, submitted by Wang-Chieh “Ronald” Su, for the “Herbal World” cannabis retail store, was withdrawn by Su, who plans to resubmit it after a cannabis testing lab starts to operate, according to Rev and Tax.

According to Guam law, recreational cannabis and cannabis products cannot be sold unless they are tested by an approved lab.

The board in October approved the responsible official application for Shintaro Okada, of Pacific Analytical Services, which could be the industry’s first cannabis testing lab.

Rev and Tax compliance supervisor Craig Camacho told the board the nine responsible officials approved during past meetings were briefed about the next steps during a Nov. 17 meeting and were given the application forms required to open a cannabis establishment.

“They have it, they’re working on their packet, but none of them actually submitted to the office for review or consideration at this time,” Camacho said.

A 2019 law legalized recreational cannabis on Guam, and the industry’s rules and regulations took effect May 29.

It’s legal for eligible adults to grow, possess and consume cannabis, but it is illegal to sell it or trade it for anything of value unless it is a licensed and permitted cannabis establishment. There are different licenses for cultivators, manufacturers, testing labs and retail stores. Residents are prohibited from owning more than one type of cannabis business.

A cannabis establishment can’t get a license or an operating permit unless there is a government-approved “responsible official” in charge.

The final step for businesses with a cannabis establishment license is a permit to operate, issued by Rev and Tax.

Guam law also requires the Cannabis Control Board to host an annual summit with government officials and private sector stakeholders, “to discuss the regulation cannabis on Guam.”

Theresa Arriola, who is chairwoman of the board’s public awareness committee, said officials have not yet met to discuss or organize a summit. Arriola is director of the Guam Behavioral and Wellness Center. 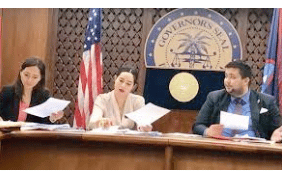